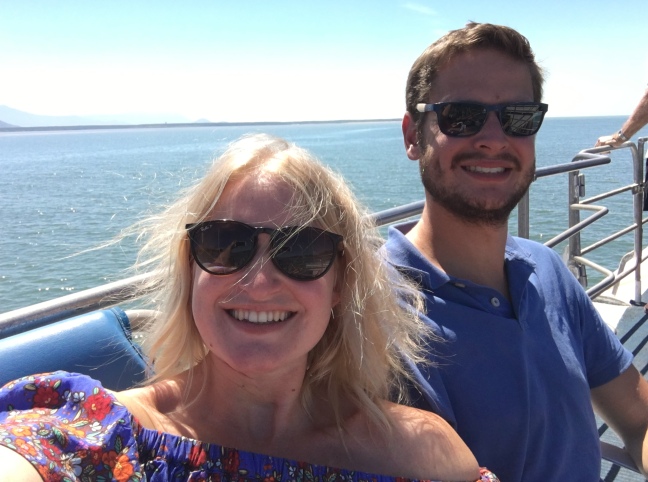 In our last post we explored the Daintree Rainforest and visited Cape Tribulation. Now we were to explore the other iconic area near Cairns.

To prepare ourselves for a nice cruise on the boat out to the island, we brought some sushi from Woolworths. It has become a regular thing for Alex and I to purchase some whenever we come across a big Woolworths that has the fresh sushi counter. And now we have Annette and Chris, his parents, hooked.

We boarded the boat at 1:30pm with only a handful of other people. Got ourselves comfortable on the back of the boat, in the sun so we could watch Cairns disappear while we drive away into the ocean. 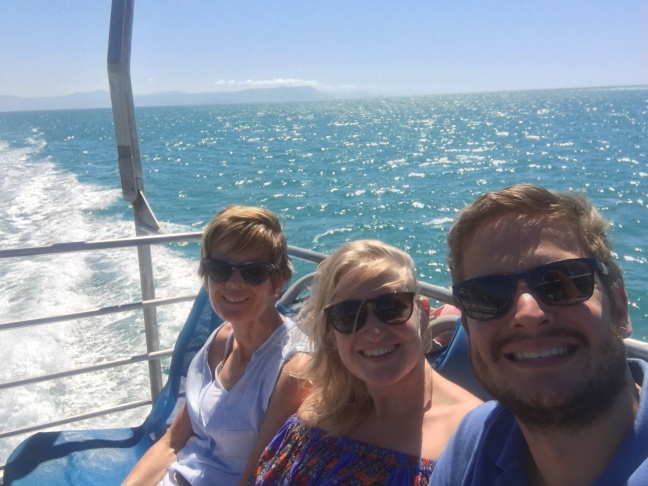 Along the way we skirted the coastline, seeing a number of beautiful little beaches and islands along the way. Some had private boats moored off the shore, but we were unsure whether people would swim their given the risk of crocodiles in cairns, not too far away…

When Fitzroy Island came into view we could see a stunning little beach to the right and some seriously stunning clear blue water.

Off the boat, we walked up to the only resort on the island and checked in. At first we were given two beautiful rooms, but they were not facing the water. So since I like to go and try get as much as possible I went down to reception and asked if they could find atleast Chris and Annette a room with a view. Afterall you don’t go to Fitroy island much, or get to sleep in a resort on an island often.

They were able to upgrade them and in the end at no extra cost #bonus! 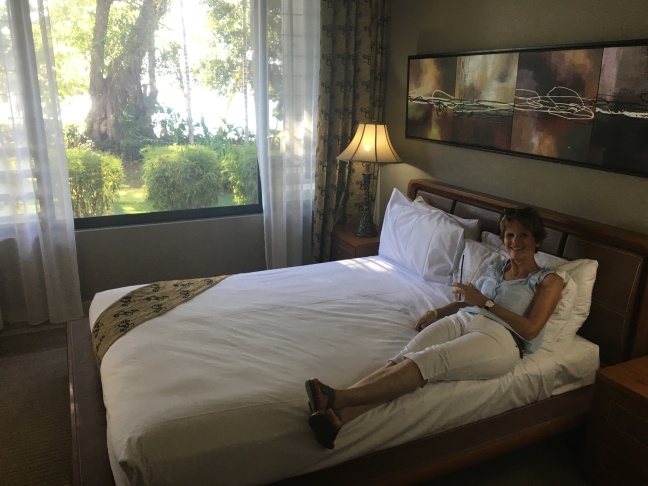 So with Chris and Annette set up in an even more beautiful room, with a view and a kitchen, we all sat there drinking sneaky drinks we smuggled onto the island. You see on the website it did say they did not allow anyone to bring alcohol to the island, but that you could buy them at the bar. We didn’t like that rule and so with some very skilled tricks we filled a water bottle with rum. Genius right?!

So with our ‘water’ and coke we enjoyed the balcony with views of the beautiful ocean and then Queensland’s Mountains across the water in the background. 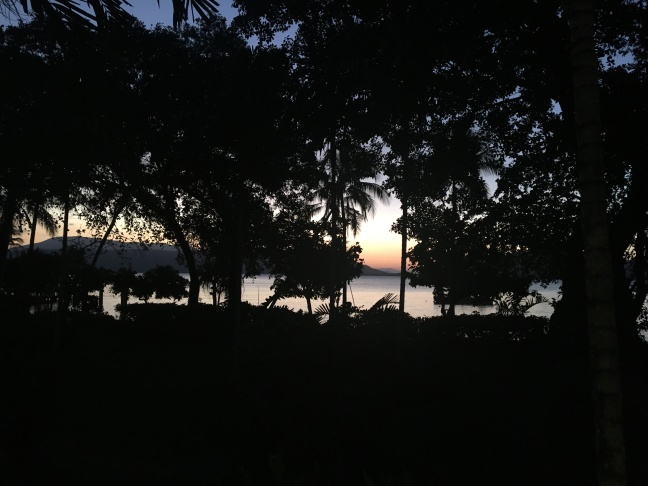 But before the sun went down, we first took advantage of then sun and went for a little afternoon swim. Now this was an adventurous swim for Alex, let me tell you why….

You see before we had headed to Fitzroy we had brought him some new board shorts. When walking down to the beach he was looking for a pocket in them to place his phone. He winged they didn’t have side pockets, but found one on the back.

We get to the beach, Annette, Chris and Alex decided to go for a snorkel while I enjoy the sun and my book. They are snorkeling and even see a turtle, its an awesome first swim on Fitzroy Island. That is until about 10-15 minute into the swim Alex realises his phone is still in his back pocket of his board shorts…

First reaction is shit, then it turns to some laughing. He wanders up to the island store where he buys a bag of rice and gets a container to place it in from the girl, who’s response to his use for the rice was ‘oh’…

With not much else we can do other than wait, Alex heads up to the bar with Chris and they have a pitcher of beer. What else can you do haha.

#phonemeetsdrone and is with nemo now

So our ‘water’ and coke drinks were a nice enjoyed drink after that first swims events.

That evening we headed to Foxy’s Bar, one of the two places to eat on the island. It was a little shack style place right on the water. We ordered some burgers and beers. Once we had enjoyed our meal we played ‘Heads Up’, the game of charades but in the form of an app.

We began with countries and locations, with Chris and Alex smashing it out of the park of course. We then went on to animals and somehow we got to the group describing to me what a peacock was. Now you would think some logical ways of describing the bird would take place, however this was not the case. Chris went on to give me the clue, vegetable penis! You can guess that all of us were laughing uncontrollably, the poor staff and other guests probably thought we were crazy, but what else can you do other than laugh uncontrollably when someone says vegetable penis, trying to describe an animal? And really now that we think of it, it makes sense!

Our second day on Fitzroy was spent first on the main beach, where turtles were apparently seen regularly. We had been told that between 10-11 am was the best time to spot turtles and so with that advice we began swimming around 10ish. Timing is everything with turtles apparently.

We were in luck, on a few occasions we stopped ourselves underwater as a turtle appeared. They blended a little with the reef as there was a bit of a strong current stirring up some sand and making the water a little cloudy. It was spectacular really, the turtles were in abundance and they same not even 100 meters off shore. 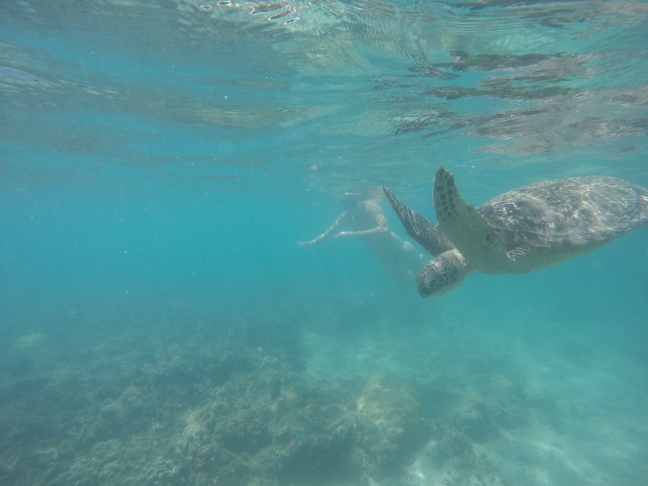 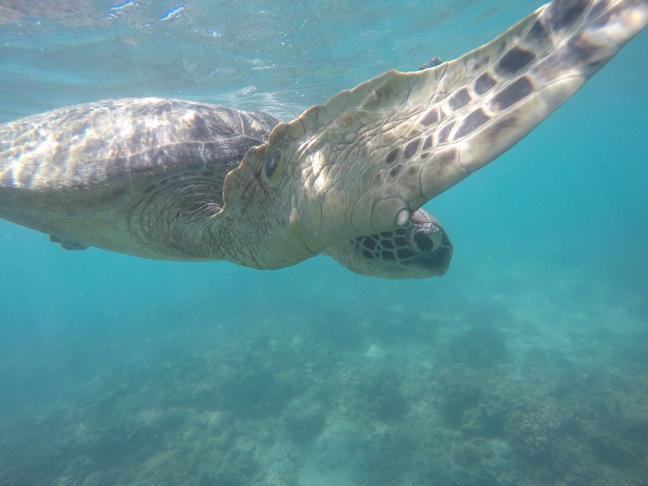 Once we have seen the reef, which was not so spectacular, and the turtles, which made up for the reef, we decided to hire some gear. Alex and I took a SUP board each and Chris and Annette got a double kayak. Our first intention was to work our way around the island, after all it didn’t look that big…Well that idea was ridiculous according to the guy running the hire shop. It would take us a minimum of 3 days to circulate the island…well good thing we didn’t give it a try then…

We settled for first paddling around to the stunning beach we had seen on arrival, it was called Nudey Beach. Now fortunately, or unfortunately which ever way you like to put it, the beach does not in fact promote nudity. Thankgoodness right!? In fact in Queensland public nudity even on beaches is apparently prohibited, so we just went for the name not the content behind it.

The journey there was lovely with only a small bit a breeze making our paddle more of a workout. We passed on top of coral and saw a few fish along the way. When we arrived at Nudey beach we all got in for a little dip just to say we swam at Nudey Beach. 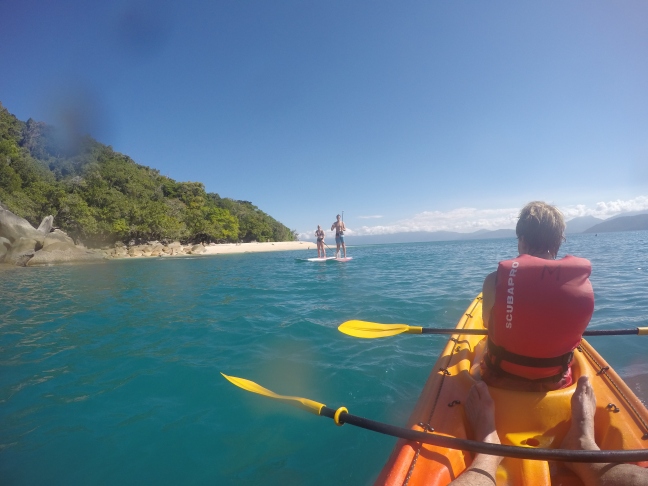 Afterwards we worked out way back to the main beach, which was also where the marina sat, the water was calmer there. On the way back we attempted a few tricks with our SUP boards and then Chris and Annette gave them a try. They both got on with little effort, given how Alex and I started we were impressed!

We mostly spent the rest of that afternoon lying on the boards, falling off at times and in Chris’s case, falling right onto coral and getting injured. Not the most ideal way to dismount a SUP board, and as a result he got quite a few cuts on his feet. Not the best outcome for a first SUP experience. 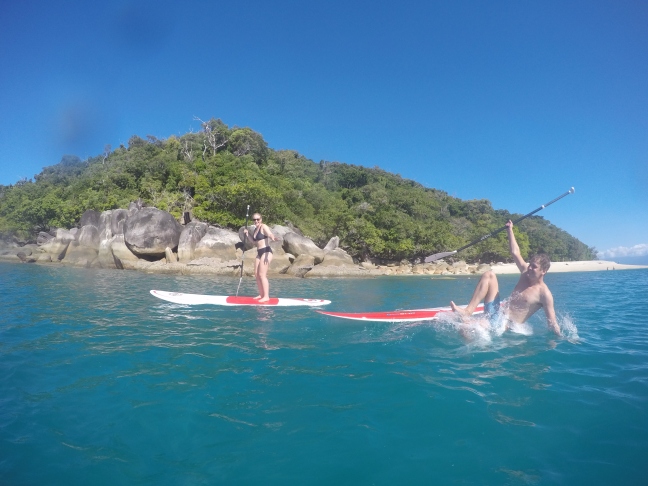 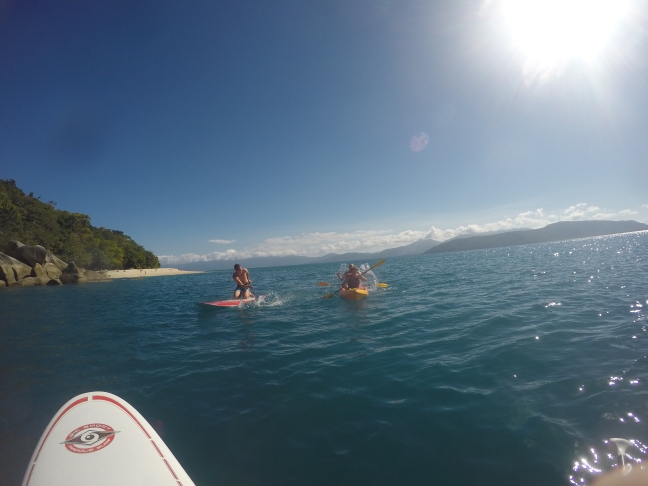 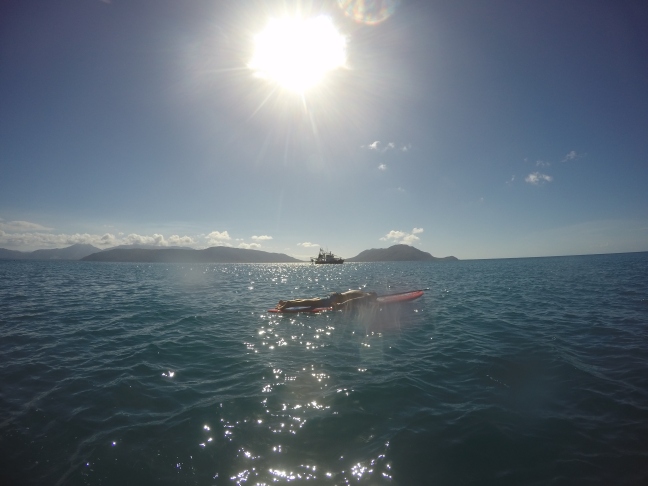 But Chris was not alone in his injuries. Of course you remember Alex had swam with his phone the day before…And Annette and I realised that we had maybe gotten a little extremely burnt on our butts. We looked like a lobster and it’s flesh with the sheer contrast of red and white. A little bit funny for a second and then quite uncomfortable when we both couldn’t sit at dinner.

With our injuries, our next and last day on Fitzroy was cut a little short. Given we did not want to go in the sun too much anymore and Chris was unable to wak far, we changed our ferry departure from 5 to 12:30. Before we departed back to Cairns, Alex, Annette and I went for a little walk to Nudey Beach. This route was through the dense forrest that covered the island, it was a nice different way to see the island and the stunning beach. 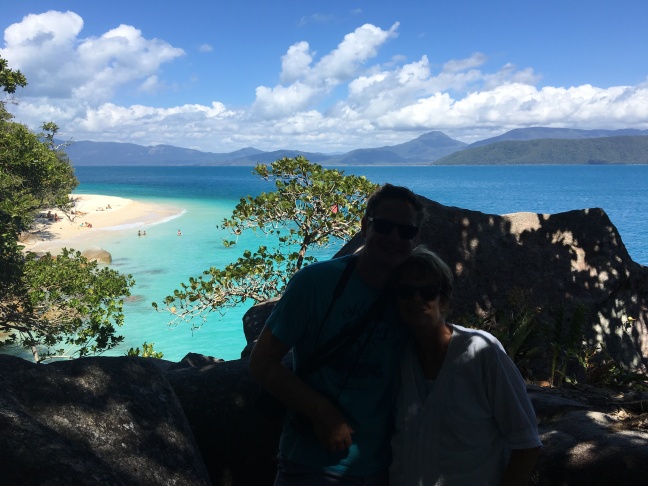 After a lovely few days we boarded the boat and headed back to Cairns. Now you recall I mentioned Alex had placed his phone in rice two days prior when he had gone swimming with it? Well it hadn’t worked.

Our first stop after some lunch was to buy him a new phone. And why not upgrade a little since he had to buy a phone hehe.

With a new phone, a sore foot and some burnt butts, we then spent one last night in Cairns before heading onto another adventure with Chris and Annette with us.

4 thoughts on “Our time on Fitzroy Island…#phonemeetsdrone”