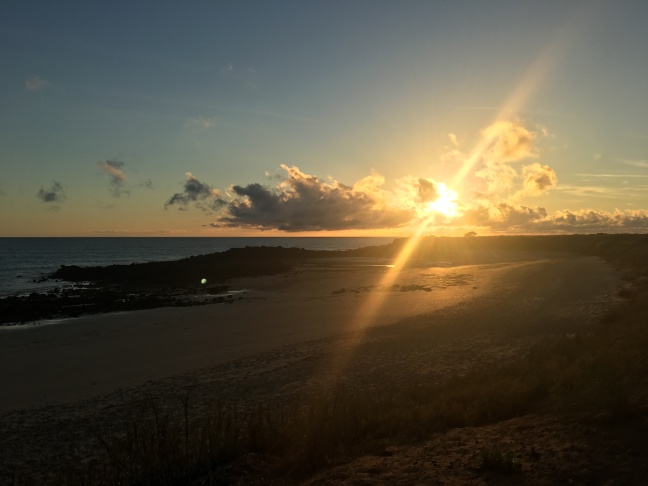 And here it is, our post about our weekend up the Dampier Peninsula.

Our journey began heading out of Broome, we turned off the road towards Cape Leveque, which was bitumen for a short distance and then turned into a dirt track. Nothing could have prepared us for the road, it was like a river bed with a red sandy base and slanted sides, so that when you drove all the way to the left it felt like the car was tilted. I was driving to begin with and made a comment to Lianne and Alex to shift their weight to the left, I was slightly worried but really it was not that much of an angle. It was just the extreme difference to any other tracks we had done. 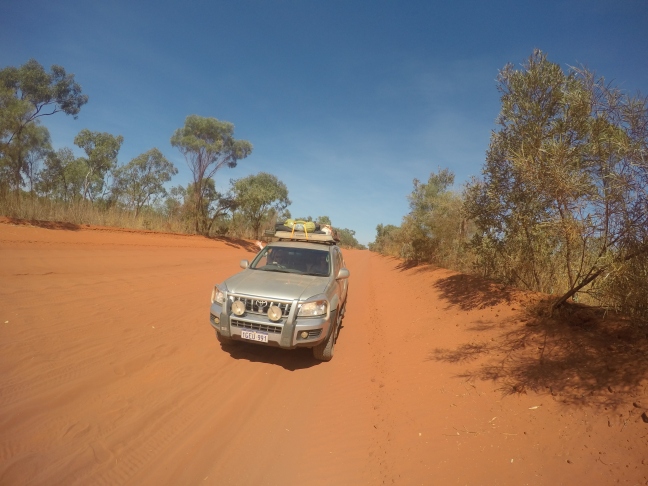 Given it was a sandy track, we took our time and taking an hour or so to get to the bitumen again which was just before the entrance to Beagle Bay. Once on the bitumen we continued all the way north to Cape Leveque, we decided it was best to visit there first and then track our way back down to Middle Lagoon, where my cousin, her family and friends would meet us that afternoon for a weekend of camping.

The drive up the peninsula was longish, but once we arrive at Cape Leveque we headed into the ‘tourist centre’ of such to ask about the area. The main attraction from what we gathered was the Horizontal Falls tour, which was unfortunately way to expensive for us to try. However they had two beaches, one where there was extremely red dirt all the way to the water and we were not allowed to swim, as there were strong currents (and sharks). The other swimming spot was literally on the other side of the point, it was nice sandy beach, however as the tide was out the many rocks at the waters entrance made it impossible to enter the water or swim. We sat for a little bit on the beach but then decided to head back to the car and head back down the coast.

Before heading down to Middle Lagoon we drove quickly through One Arm Point, where a dog decided to stroll in front of the car and lie down, and us almost hitting it. Luckily the dog was all right and we continued on our journey.

We arrive at Middle Lagoon just after the sun set, however we did get to see it setting through the trees on the dirt track driving in, which was a stunning contrast. My cousin and everyone was already there and set up, there was a perfect little spot for our tents so we set everything up. That night we cooked our dinners, sat by the fire a little and then headed to bed. Lianne had not yet slept in Alex and I’s rooftop tent so she gave that a try on this weekend trip away, Alex and I took turns in sleeping in the tent below, which was right next to my cousins little kids heads. We were so close that we heard the little one wake nice and early at 3 something am, very funny as it is not normally a time we are awake, camping is definitely making us morning people.

We woke that morning with some serious fog settled over the entire campsite and the bay, we could not say how long it was like that but it lasted at least an hour from when we got out of bed (we stayed in bed a while trying to catch up on sleep). It was definitely eerie but also very cool and once it passed we headed down to the lagoon, which was about a 5 minute walk from our tents, and we stayed there pretty much all day. It was absolutely beautiful weather and we soaked up a lot of sun, you see my tanning continues guys!

My cousins friends had brought a dinghy boat with them to go fishing, so when the two men decided to head out Alex joined them. Whilst the three men were out in the ocean fishing, Lianne, my cousin, her friend, their kids and I chilled by the waters edge. At first it was very easy to stroll right into the water, not even 5-10 steps from our towels, however as the day progressed the tide went out extremely, and our walk got longer and longer. But before it went out so far we had some paddleboards so we all did a little touring of the bay and caught up on reading our books. This was in the afternoon when the water had completely receded: 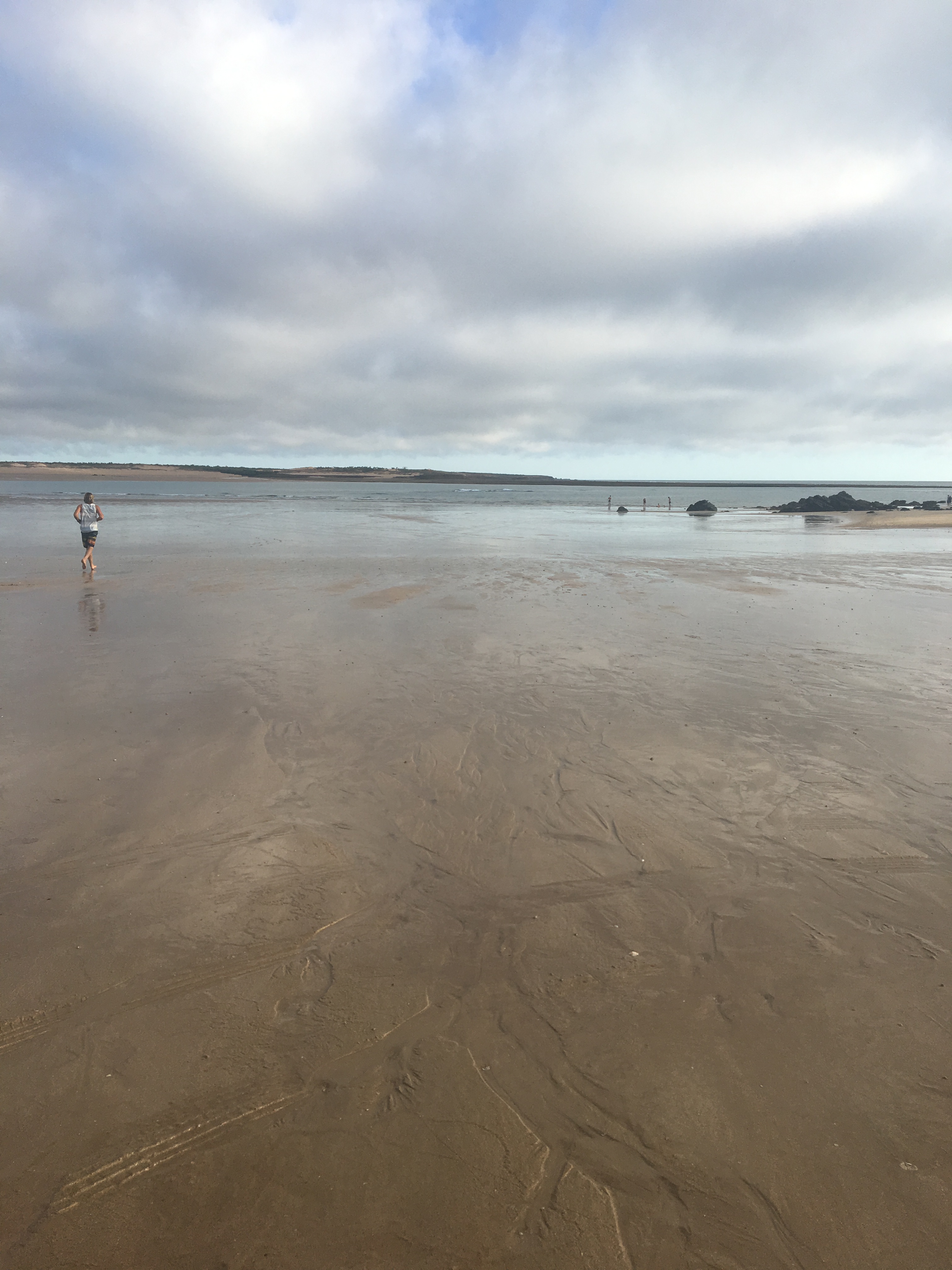 At around lunch time that fog that had settled over the camp in the morning returned out at sea and slowly seeped into the bay where we were. At first we thought oh wow some fog or some smoke, as they were doing some prescribed burns up near Cape Leveque, but slowly it came further into the bay and got thicker. At that point we could no longer see a creek entrance at the other side of the bay, or the entrance into the wide ocean, where the men were. This image gives you a small indication of the fog coming into the bay: 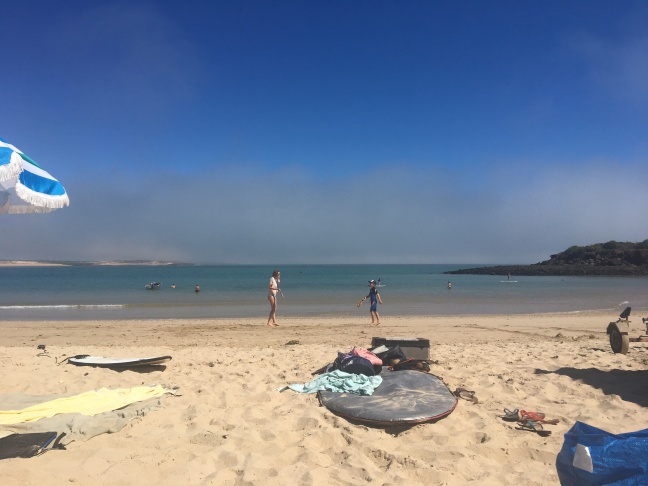 Many boats came back in that time and each time we all looked up and thought “is that them?”. After what seemed like hours (they were gone for about 3 hours I think), they returned. They had a GPS with them on board but once the fog had settled on the sea around them, it made it almost impossible to see anywhere. But they were not worried and they had had a successful fish, catching about 5 fish.

Before the fog had settled in, the men had been on the trying to locate a fishing spot when they saw a whale in the distance between them and the land. They floated closer with then the whale floating right next to them and then breaching 10 meters from the boat, and Alex got some of it on camera!! It’s a massive video, so once we have time to reduce the size we will upload it to Instagram for you all to see, keep watch.

How amazing of an experience! Catching some fish out in open water, having some eerie fog settle over you and then a whale just pop up and say hello right next to the boat. Us ladies were definitely a little jealous of the whale siting at least!

That afternoon a few more friends of my cousins arrived and we set up a big fire to sit by after dinner. Dinner was a little bit special with my cousin’s husband cooking up the fish they had caught that morning, there were two fish but we only remember one, the best one, blue bone. He coated the fish in some panko crumbs and then a magic dipping sauce, which was kewpie mayonnaise and siracha chili sauce (seriously delicious combination). It was out of this world delicious, one of the best fish we have ever tasted!

We ended the day by the fire with the kids roasting marshmallows like crazy (seriously I don’t think we had ever seen anyone cook and eat so many so quickly) and when they had gone to bed, Alex and Lianne introducing smores into everyone’s lives.

On the Sunday we all woke nice and early again, heading right to the beach. Everyone intended on leaving that day back to Broome so it was nice to soak up as much sun as possible before getting back into the car. The boat was heading out again, so this time Lianne and Alex hoped on board, they went for a little fishing trip for just over an hour, but unfortunately did not catch anything. I relaxed on the beach, reading my book and chatting with the ladies which was lovely and relaxing. Once they returned we swam a little more and then slowly headed back to pack up our camp.

With our quick pack down we were done quite quickly, we said our goodbye’s and then were on the road and headed to Whalesong, which was a camp ground/café just a few km back down the track towards the main road. We had heard many good things and wanted to try out the café for lunch. A couple of pizzas, a smoothie and some fresh juices later we were pretty content, staring out at a beautiful bay, enjoying the shade and yummy organic food in the middle of nowhere. 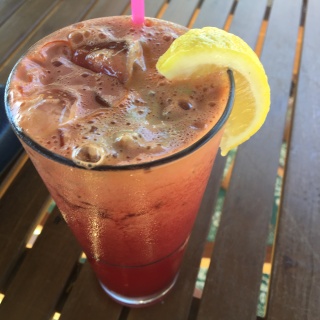 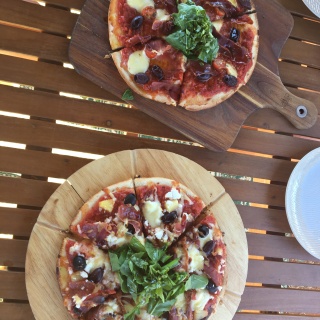 On the road again we headed towards Beagle Bay, there was a church there where the interior and alter was made from pearl shells. Along the way, on a very bumpy track I might add, I fell asleep. This has occurred on a few occasions, for some reason the bumps in the road seem to calm and rock me to sleep. Once in Beagle Bay, a beautiful looking community, we checked out the church, which was very cool to see and then headed back towards Broome. I slept the whole way, which was by far a lot more bumpy than the journey to Beagle Bay, in fact there were wave type bumps where the car was ever so quickly airborne, they went for a while so it was like a roller coaster. However I was asleep and I don’t remember anything, but Lianne and Alex tell me that they saw me hit myself in the head a bit and I looked a little odd, especially not waking at any of those bumps. I was just so tired, it may have been due to our early rises, or the hay fever tablets I’d been taking that had a very strong ‘may cause drowsiness’ on the side, who will ever know…

The weekend was really quite wonderful, we got to see another part of Broome that we may not have found on our own, we got to see how others camp, and they had pretty spectacular set ups. Definitely would recommend driving to Middle Lagoon for a weekend away, definitely over Cape Leveque in our opinions, it was just quieter, remote and quite a lovely place to lie in the sun and swim. Thank you to my cousin for the invite and for the fantastic weekend away!

One thought on “The Dampier Peninsula and Middle Lagoon”