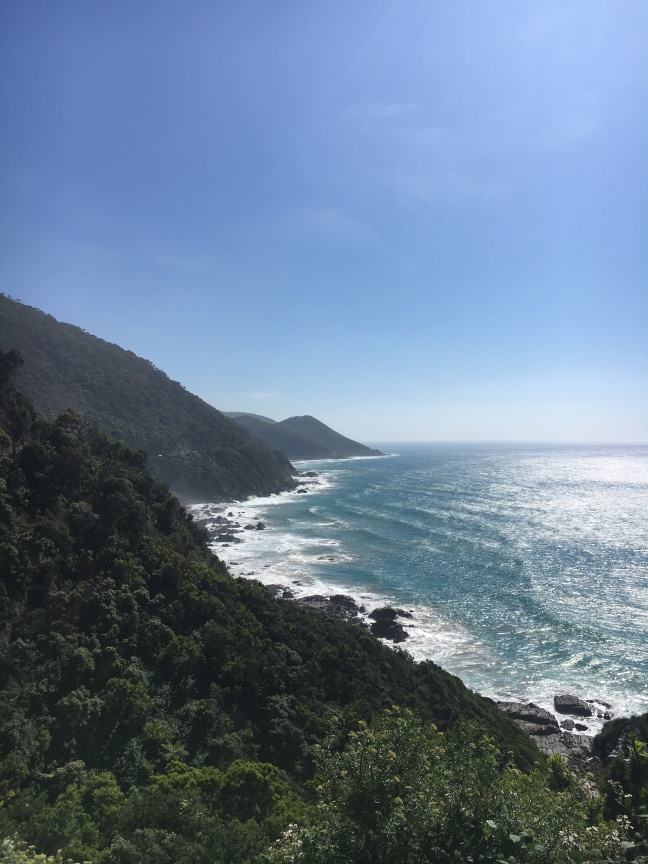 Before getting into this blog we would like to apologise for the delay in posting these blogs. We have been undertaking the last weeks of our trip around Australia and as such have not had great coverage, or time. Don’t worry though there is still so much of our trip to share even if in real time we are at the end.

So back to the story we go….

After an epic month in New Zealand, followed by a spectacular and surprise weekend trip to Perth, we find ourselves back in Melbourne.

We were picked up at the airport by my cousin Chris and taken to his lovely home for a night. We had a delicious meal with them and the next day said our goodbyes as we headed for the Great Ocean Road.

At first we did intend on visiting The Grampions, however it was meant to be quite hot in Victoria that week, so to the ocean we went.

Our first night was spent in a caravan park we found just driving along the windy cliffed roads. Right next to the ocean and a river we set up camp and enjoyed a night under the stars with the waves crashing nearby.

The caravan park itself was extremely basic, with not coverage (not to worry), paid showers or otherwise cold ones and just a bench for a campers kitchen. It was great for one night but we were happy to keep going and find a new destination the next day.

We continued driving along the picturesque road, taking in the warm weather and stopping in Apollo Bay for a night. We spent the afternoon on the beach with maybe 5 others, it was perfectly secluded and just the right way to relax after an amazing whirlwind few weeks.

On our third day on the Great Ocean Road, the weather made a bit of a turn. In fact on the news it was going to be a catastrophic storm to hit Victoria…Well with that news and some dark clouds brewing overhead we ended up making our way back towards Melbourne and stopping in the small surfie town of Torquay for a night. We checked into the local caravan park, and set up our rooftop tent just in time for the rain. By that time the storm had been significantly downgraded and shifted to the next day, which we were happy about. But with the weather being quite fresh we just spent the entire afternoon watching Netflix from our iPad in the tent. Super riveting stuff to read about right?!

Well the next day we woke to rain and it really continued. So with that limiting our options for activities, we drove to Geelong and went to the movies. Just before we went into the movies we heard a strange sound coming from the car. It was not loud but both Alex and I could definitely hear it, so instead of worrying right away, we went into the cinema and decided to call RACV afterwards.

They came not to long after the movie and this guys checked the car over, revving the engine and in the end telling us it was most likely the airconditioner belt. However we were a little worried about his information when he took out a screw driver, placed one end on the engine and the handle near his ear to listen to the engine…

So with his advice we then started to call around to mechanics in the area and even in Melbourne. However it was a Friday evening so our success was minimal. We decided to drive the car to our destination for that night and look into it more there. As we started the car the battery light came on, and after some searching Alex came to the conclusion that the sound was mostly likely our alternator…opps.

So we drove to my other cousins house, a stunning home we were excited to see and them! After a catch up we all decided to go out for dinner, given the weather was still crappy. Whilst at dinner, Cameron my cousin asked around to his friends and one suggested we call Lube Mobile. They worked weekends and could fix the car at the house.

So the rest of the evening was spent catching up and also booking someone in to come first thing the next morning at 7am.

The urgency was partly because we couldn’t stay with them forever, but also because we would be catching the boat with our car to Tasmania the next day. We couldn’t change the boat and we couldn’t drive it there and hope the alternator would last till Tassie. So 7am it was booked at I don’t think Alex slept at all until the mechanic called super early to say he was on his way.

That morning Alex was outside with the mechanic, also called Alex, watching him fix up our car, replacing the alternator. Yep it was the alternator and not the air conditioner belt…. And after only 3 hours he had replaced it all. We were back on the road again, very much light pocketed but with a car that worked, yay!

We said our goodbyes and thank you to my lovely cousin and headed into Melbourne. There we explored Port Melbourne for a bit until we could line up for the boat. But you can wait for that story for now…

3 thoughts on “A few days drive around Victoria, some strange car noises and being stranded in Geelong”