It’s Alex and I again. Bob and Leonne have begun their journey home to The Netherlands  (approximately thresh weeks ago…) and we had 5 days on our own to explore the rest of the South Island of New Zealand.

We set off from Christchurch after sadly dropping our travel buddies off at the airport and headed North. Our destination to begin with was a town Bob and Leonne had also stayed in when they headed south from the North Island to meet us in Christchurch just two weeks earlier, that was the small village of Hanmer Springs.

We arrived and checked into the caravan park Bob and Leonne had also stayed in. In fact Alex used the Top 10 card Bob had brought to check in, securing us some discount. However what Alex did not anticipate was that Bob may have purchased that card at this location. You see, when Alex checked in he gave Bob’s name and the card, a little white lie doesn’t hurt when trying to get a camping discount right?! When he handed the card over the guy then asked if he had gotten the card from there. Alex said no, that he was sure he’d gotten it from somewhere in the North Island. This seemed to be fine with the man, however he did say that the name written on the back of the card looked an awful lot like his handwriting, ‘how strange’?

Alex was giggling just a lot when he came back into the car and relayed this story to me. By far the biggest sneaky thing he had done before, ah except plan and propose to me (amazingly), but very cute to see his reaction.

We spent one night here and then the next day continued our journey north with the Marlborough Region in our sites. After a lot of driving through windy but picturesque mountains we arrived and check into another camp grounds Bob and Leonne had stayed in. Guys essentially we just copied your itinerary, why not it was awesome!

And then for two days Alex and I visited wineries, of course that involved tatsing wine, and then took some much needed down time and relaxed. It may sound silly but after the adventurous two weeks we realised we were quite tired and so we took that time to catch up on sleep. But did I mention we also drank wine? 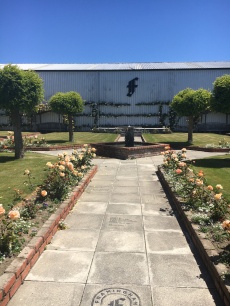 After successfully exploring the Marlborough region, we then drove one morning all the way to the town of Nelson. There are many reasons to visit this large town, but for us we only had one reason: Pic’s Peanut Butter Factory!

Yes we drove a few hours just to visit a peanut butter factory that hosted a free tour with tastings. And seriously for us it was so worth it, we got free peanut butter takeaways!!!

Now for anyone who is not a fan of peanut butter, it’s ok we will eventually convert you. We both in fact hated it a few years ago, but then slowly by slowly began to love it and now have a slightly massive addiction to it. (Slight update to this information…I may be allergic and have not touched peanut butter in a few weeks…still love it though and seriously hoping its not true).

So we went on the tour and not only did we love it because it was all peanut butter related, but we learnt a lot about the process, how and where your peanuts come from is highly important regarding the flavour. In summary, if going peanut butter, buy ones using Aussie or Argentinian peanuts.

After our peanut butter obsession and some non-peanut butter lunch, we then began heading south. We spent a night just outside of Murchisson before we then eventually got back to Christchurch for our last night in New Zealand.

Our last night was spent in a beautiful Airbnb and feasting at our favourite place we had discovered in the city, the Little High Eatery.

The next day we were up way too early to catch our flight at 6am back to Australia. But we didn’t care, because we would be taking two long flights to get back to a very special group of people in a special part of Australia, for a special reason. Some special reasons I did not know about, but you can read all about that here (even if you have already read it).

2 thoughts on “Final days in New Zealand…Where shall we go?”