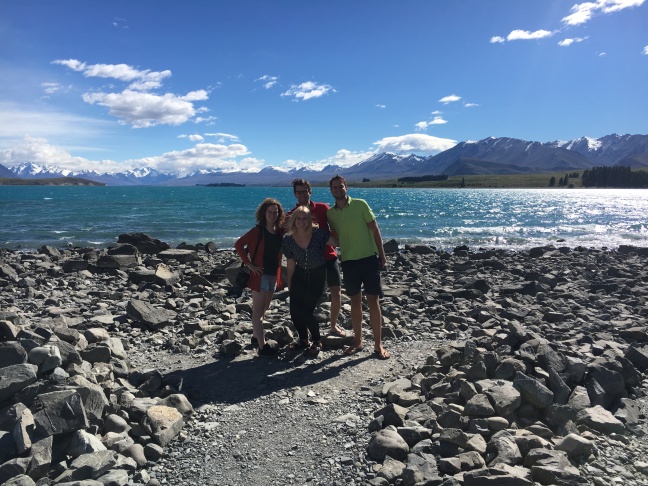 It’s the 4th of November and we woke up, the four of us, in the very small town of Fairly (and yes this post is delayed, sorry but that is life mum). Before departing the town after breakfast, we made a necessary stop in the towns only notable building, courtesy of the towns information center. If you didn’t guess, knowing us it always involves food of some sort, it was the towns bakery. They had won a number of awards and their cake cabinet showed us why with a number of amazing looking treats. We selected four, with a coffee for Alex and I, and then we got on the road.

We drove to lake Tekapo first which was around an hour from Fairly, and even though outside the sun was shinning and we had dressed for warmish weather, when we arrived we were slightly blown away, literally, and it was freezing!

But oh my goodness I cannot even begin to describe just how amazing the drive into this magical part of the world was. I mean it was lush greenery everywhere, with windy roads and snowy peaked mountains in the background, which then opened up into a massive, glassy, spectacular lake. I mean it is huge! 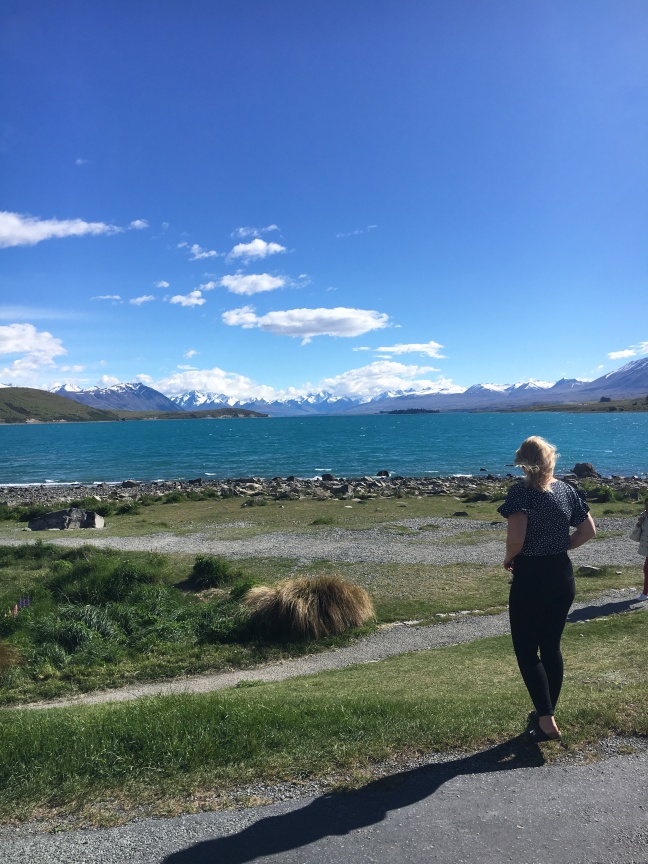 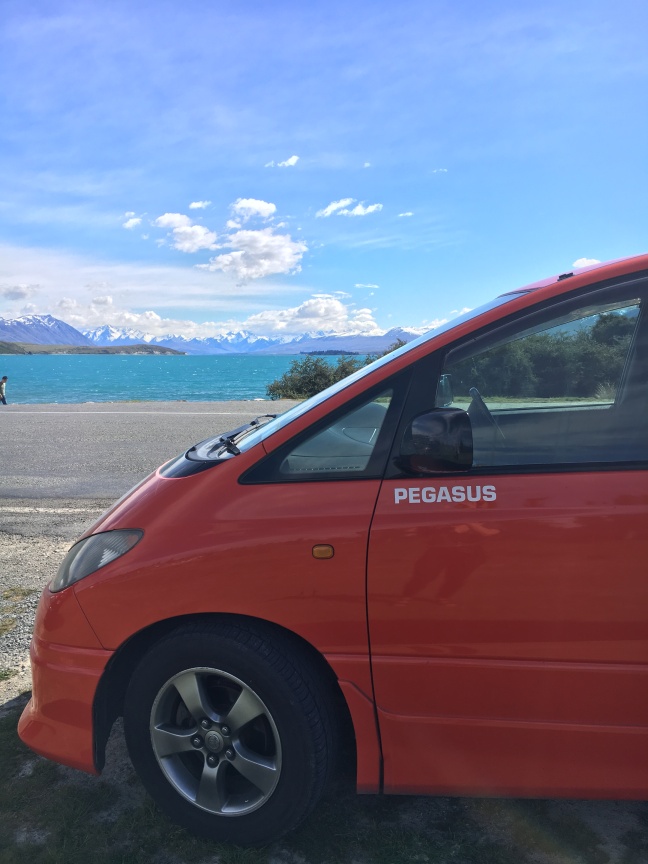 We stopped off in the first viewing location, where we brought out our box of treats from the bakery and snacked away with the best view. 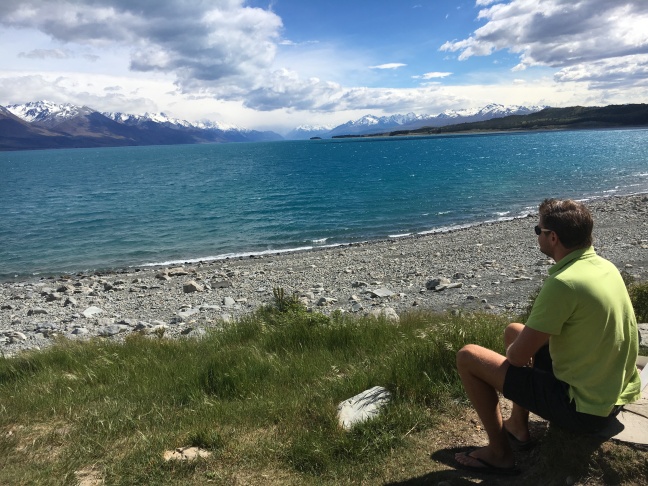 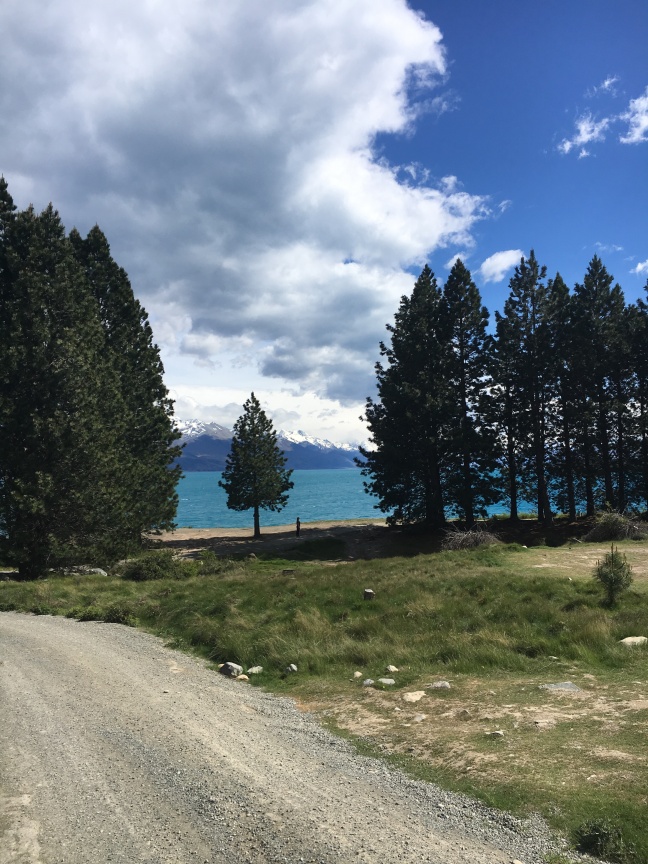 Afterwards we drive into the town of Tekapo, where we visited the famous Cathedral. And as soon as we saw it we understood why it was famous. It was situated right on the lake, a tiny stone church that had full views of the mountains in the background. We weren’t allowed to take photos inside the church, but I snapped this one outside just before I was told off… 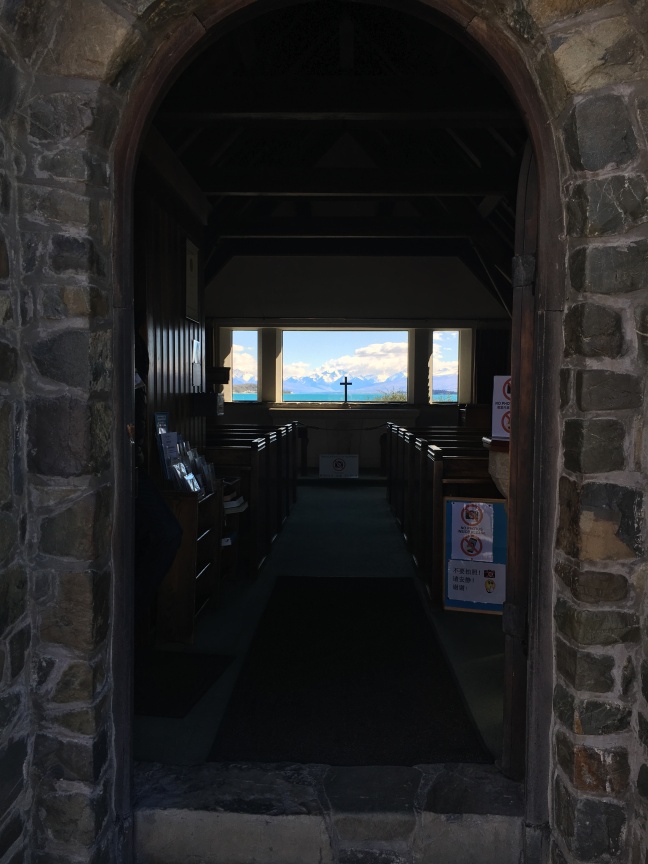 Once we had seen the church, we went just behind it and whilst taking in the amazing view, also took a few pictures. 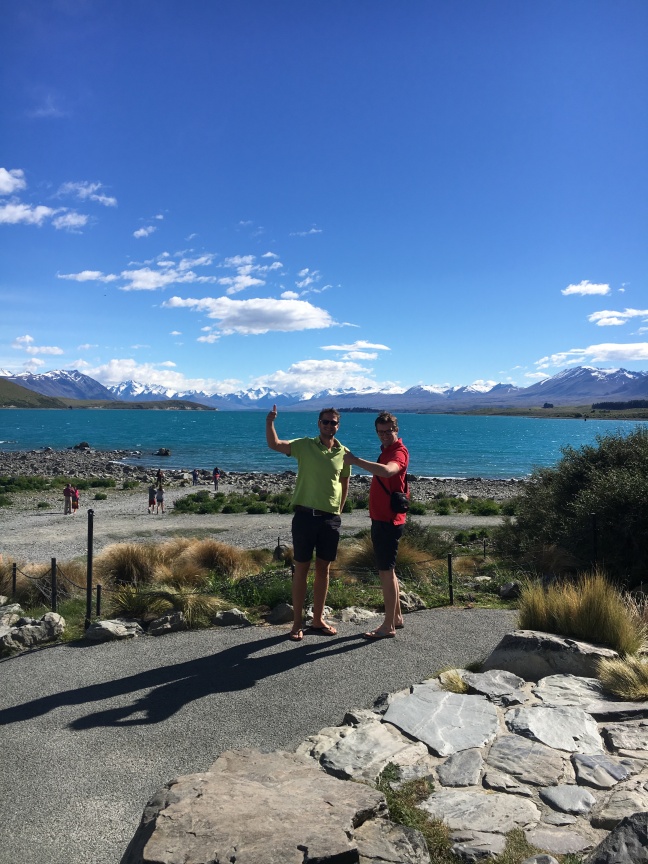 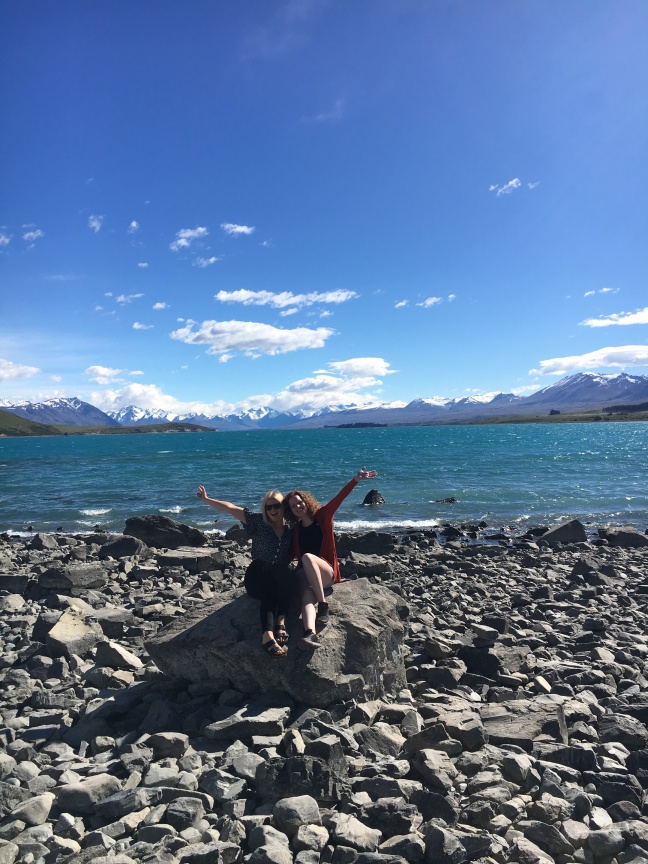 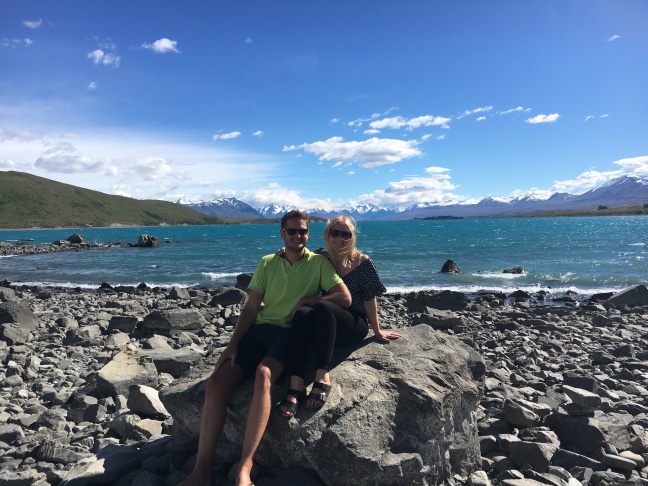 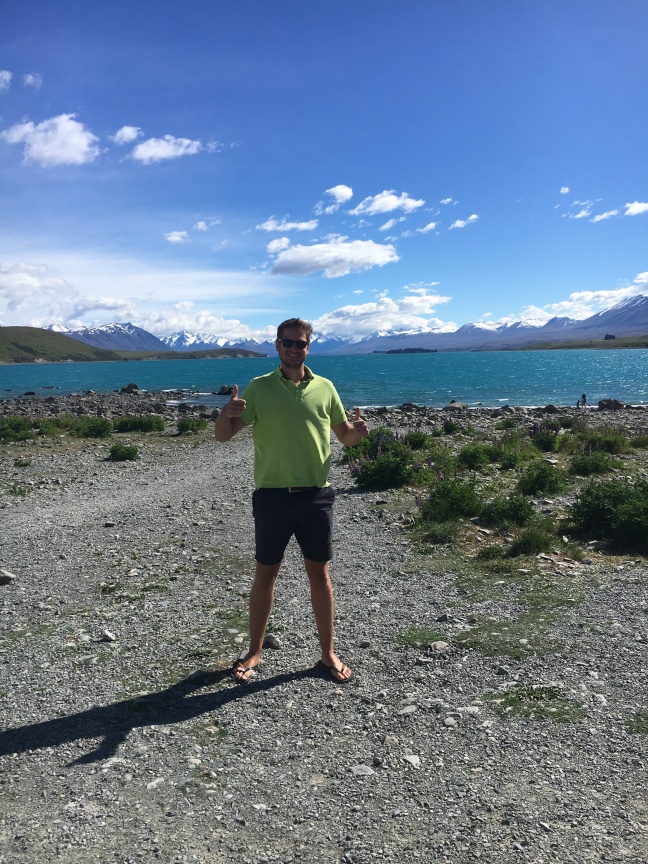 Completely amazed by what we had just seen, we hoped back in our cars and then drove to Lake Pukaki, which was about a 45minute drive from where we were. And really the views driving there and when we arrived just kept getting better! This lake was positioned right in front of Mt Cook, which in a way made it just that more spectacular in our eyes. and ok yes in pictures they do look practically the same, but they were so beautiful in their own way! The sun shon perfectly for us to see everything in front of, as well as a majority of Mt Cook which then eventually was hidden by misty clouds. But oh my goodness isn’t it just beautiful?! 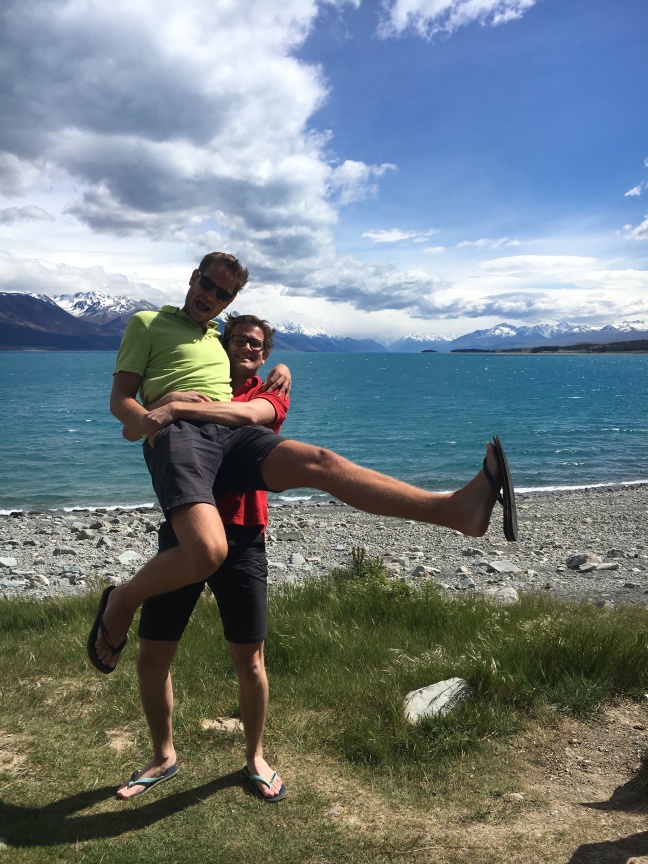 On a high from yet another amazing scenery and views that took our breath away, we then drove all along the edge of Lake Pukaki towards Mt Cook. And we literally drove along the waters edge, it was amazing and crazy close with no barriers between the road and the water. 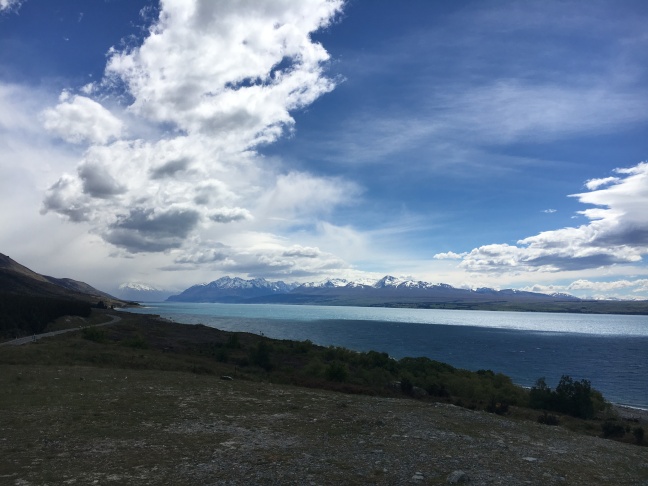 And whilst we drove close to the edge, we also drove into the misty clouds that we had seen covering the mountain. Those misty clouds turned into rainy clouds that started out as a sprinkle and grew into decent rain. When we eventually got into Mt Cook, instead of driving straight to the walking track we intended on doing, we stopped in the small village and visited a venue for lunch. It was indoors and would served warm food, and given how the weather had changed we were happy to warm up for a while. 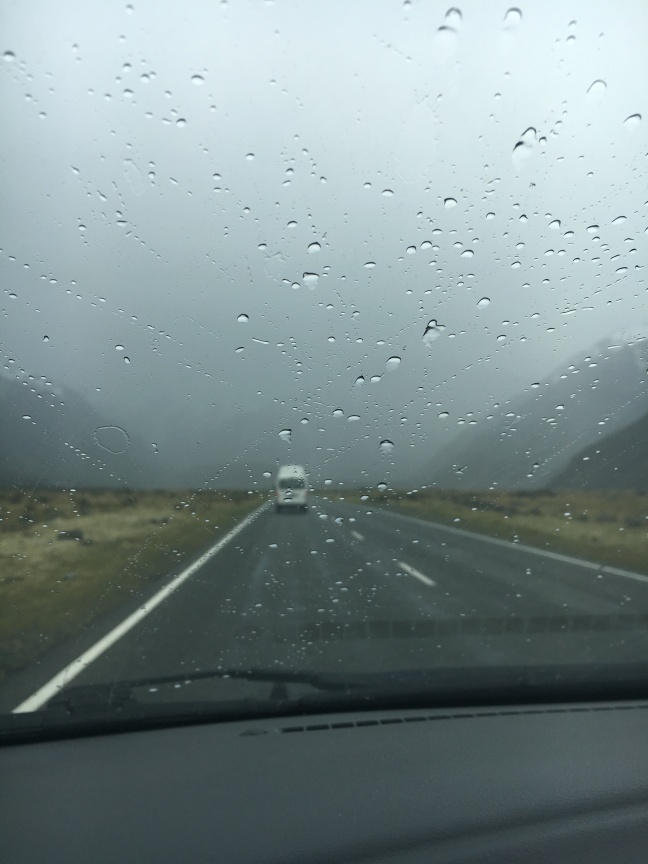 With food in our bellies we braved the weather and drove to the Hooker Valley walk. When we arrived we walked the first 15 minutes to an amazing lookout, but then as the rain continued to get heavier, we decided to then miss the hour hike and head back to the car. 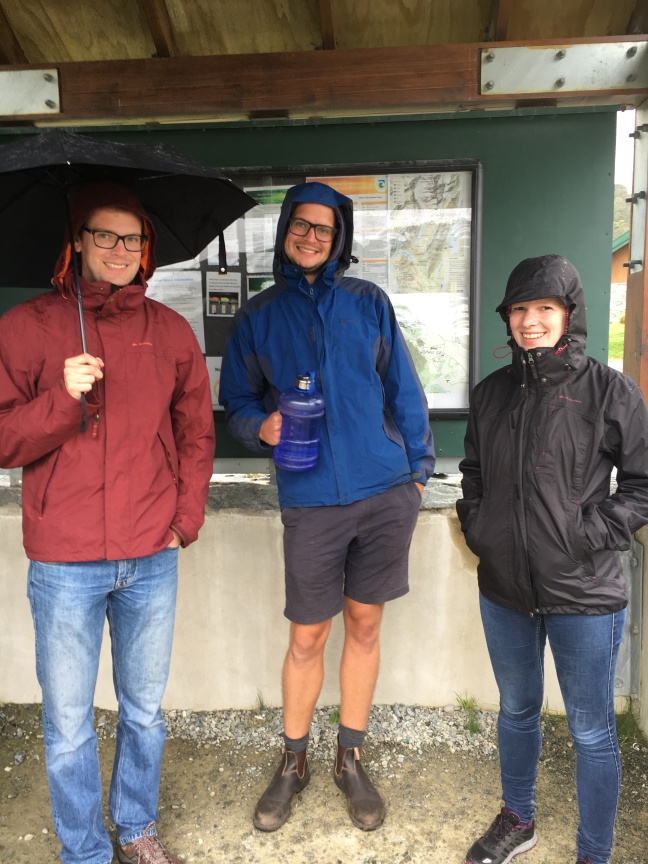 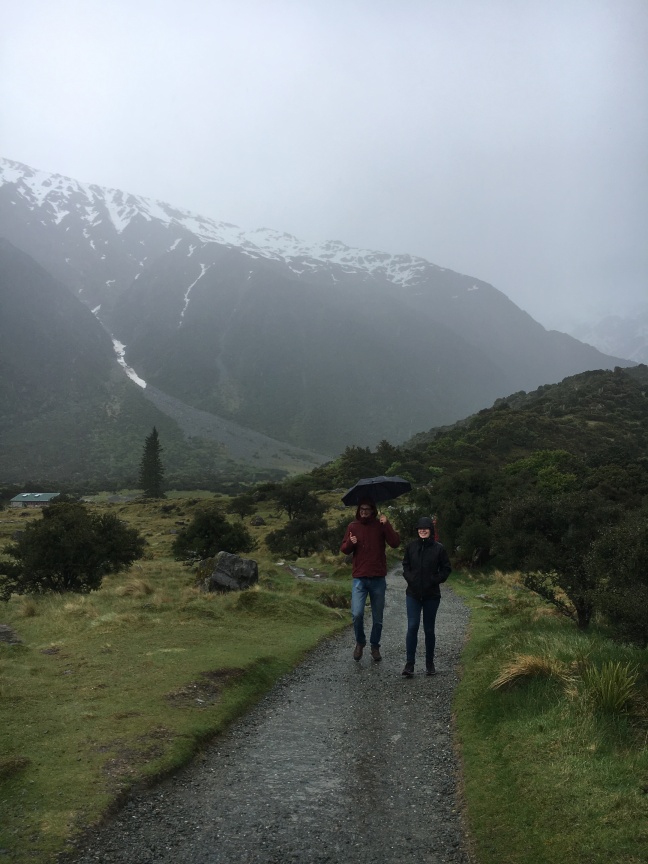 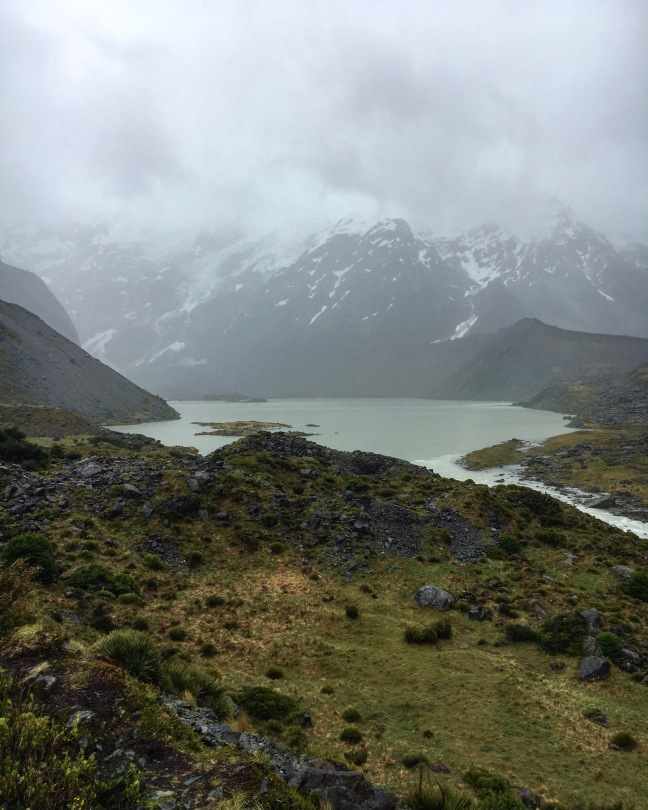 Once we were back in our cars, with our rain jackets completely soaked through, yes it had rained that much, we drove to the ** Glacier. When we arrived it was still raining, because of that we Googled images of it and then decided to leave Mt Cook.

We drove back along Lake Pukaki which I assume was spectacular still, but I slept the whole way along. I woke, as did Leonne, when we arrived at our caravan park for the night in the town of Omarama. Another town that did not have much to offer in things to do, but was situated at the base of mountains, which we loved. They also had an amazing campers kitchen set up which really felt like a kitchen/living room/old ladies house. There were couches, a fire place, a bookshelf full and an old ginormous backed TV. Given we had been drenched not too long ago, we fled inside to the warmth. We all lounged around enjoy the comfort of indoors, only leaving when we had to go to bed. And that was a freezing matter! We had hot water bottles, an extra blanket courtesy of Bob and Leonne and as many layers of clothing we could bear sleeping in. Safe to say we were slightly unprepared for the cold when we arrived in New Zealand, but this would not be the only or coldest experience we have in NZ.