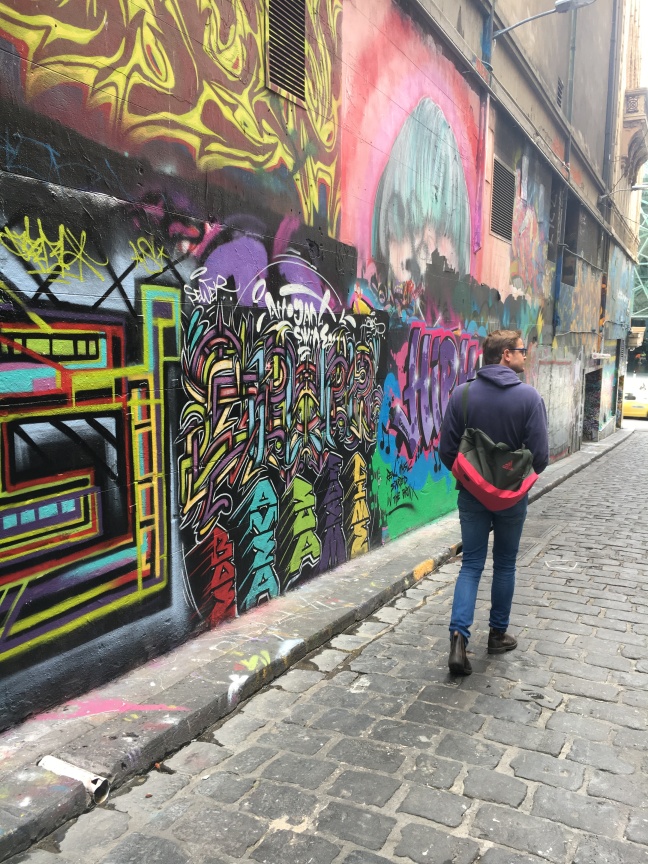 Disclaimer: This blog is in fact 3 weeks old, and as it posts we will in fact be on a plane home to Australia. But whats a little delay in telling a story right?!

Before driving straight to Melbourne from the Garden of Eden (Check out our previous post: The ‘Garden of Eden’ does exist!) we did in fact spend a few nights in other towns on the way, however they were quiet, in a passing through kinda way, so we will just skip straight to our arrival into Melbourne.

We drove into the city from Dandedong, where we had camped the night before and experience quite a crazy rain storm, seriously it was crazy! But we drove out fine the next day and into Melbourne from there early in the morning. I was in charge of navigation.

When I plotted our destination in the GPS it only brought up the three major highways, which were also toll roads. Given our history with toll roads in Brisbane, and our lack of an account in Victoria, we thought it best to just avoid them. So with the GPS on, instead of following that annoying ladies voice, I directed Alex along a road parallel to the paid highway. We weaved our way through streets and tram roads, which if you have ever been to Melbourne you will understand just how weird and hard it is to drive. Finally we arrived in Northcote where we would be parking our car for the evening at my cousins friends house.

We waved goodbye to Otis (yes our car has a name) and got on the train into Flinders Station. Once there we walked around a little and got some lunch before heading to my friend. She was on assignment from Perth for a few weeks and wonderfully happened to be in Melbourne too. Even better, she had a spare bed in her Airbnb that we could use for the evening. So we met up and got the keys from her and would then catch up with her later that evening.

We walked back to Flinders Street, found the awesome Airbnb and chilled on the couch for an hour. It was absolutely freezing in Melbourne, in our opinions, so it was mostly a shelter from the cold for some time.

In the late afternoon we then went back out into the cold and went shopping. We needed to buy another bag for our trip to New Zealand the next day. With that task complete very quickly, and a quick stop in Saphora for me, we then walked to dinner.

We were meeting with my other friends who lived in Melbourne, who I had met in Denmark the year before whilst on exchange. In fact that was also where I had met both friends and we would all be having a catch up.

My friend from Melbourne took us to this alley way dumpling house and ordered all the essentials from the menu. We were happy to not order and everything was so delicious!

My other friend met up with us all after dinner and we had such a wonderful time with the four of us catch up, talking about our trip and their travel plans. During our chats us girls did discuss all going to an F45 class the next morning, but then when breakfast was also proposed as an option we opted for that instead.

So after a lovely catch up evening, we headed back to the Airbnb and would see each other again the next day.

The next day arrived and we again went to a little alley way breakfast joint which was so cute and seriously delicious! Pauline you are a legend at finding hidden places in Melbourne and we can’t wait to try more when we see you next!

We all said our goodbyes after two awesome catch ups and Alex and I then made our way to the train. From there we went back to Northcote and in fact met with my cousin Chris. We had lunch at another awesome Melbourne café, seriously we just ate whilst in Melbourne! After that he was wonderful and first took us to our car to collect our bags and then dropped us at the airport for our flight. He would be looking after our car for the time we are in New Zealand and because our flight was soonish he offered to drive our car into the city for us after dropping us off.

Alex and I were so thankful to have been looked after and it was so wonderful to see him and catch up as well! And it had been so fortunate that he had dropped us at the airport that little bit earlier because when we checked in, the air hostess moved us onto an earlier flight because we would arrive into Sydney too late for our transfer flight, which was due to a number of other flights into Sydney that same time being cancelled.

So after checking in we went through all the airport checks and boarded our plane to Sydney not long after. It was a short flight and we got to see the Habour through our windows as we landed over the city, which was spectacular.

We didn’t wait long till our second flight, and when we boarded it was clear the flight was not completely full. We had in fact brought our flights on frequent flyer points and so we were positioned at the back of the plane each time. So when we noticed that two whole rows were empty, as soon as the seat belt sign came off, Alex went onto one row and then we each had three seats to ourselves. With three seats to each of us, we put our feet up and settled in for the 2 hour flight. There was an amazing sunset as we took off, which as you can see we enjoyed. 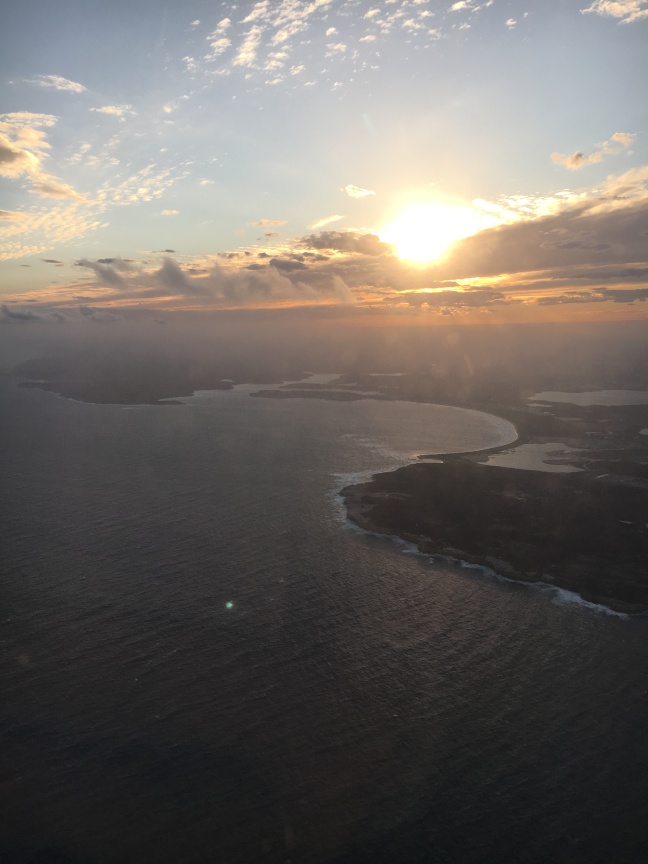 I took a few pictures and as I was doing so the flight attendant gave Alex and I some alcohol to pose with and enjoy after. 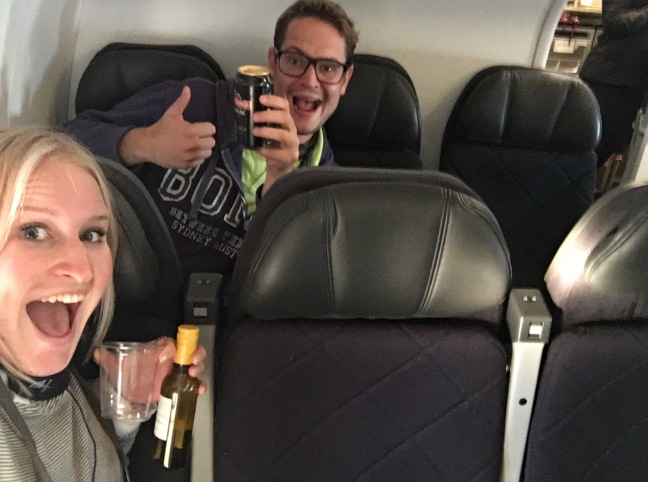 He was so sweet and thought we were cute getting so excited about extra seats, but really why not when you can practically lie down for a few hours?!

When the food service started, the flight attendant then came to give us more drinks and after dinner gave Alex a few extra deserts and treats. Near the end of our flight I gave back the wine he had given me because I wasn’t keen on drinking on the plane, but then in return he gave me two bottles of champagne and said we could enjoy them when we arrived in our hotel.

We had a nice chat with him and after departing the flight we said to each other that not only was that the quickest flight over seas, on par with flying to Bali from Perth, but he was also the nicest and chattiest man and flight attendant we had ever come across. He really made the flight and we definitely enjoyed the champagne when we had settled in New Zealand #ThankYouQantas!

One thought on “#Adventures from Melbourne to New Zealand”