We have departed #thenationscapital everyone, i.e. Canberra! It was a really hard decision to leave now what Lonely Planet classify as the 3rd best city to visit in 2018, but we did it…How we did it, well you just have to visit the city and you will understand why…

The city isn’t that bad at all, its actually really lovely, but it is more of a very spaced out small town than a city, so you run out of places to see and do after some time…

Once you leave the city you are surrounded by countryside, I mean really it is a city in the middle of nowhere. But the countryside is absolutely beautiful, with greenery everywhere and hilly roads throughout tiny towns. Eventually we entered the NSW snow region. Our first stop was a recommendation from our hosts in Canberra, my mum’s friend. We stopped in at the Wild Brumby Distillery, where they made their own gin and liquers. We had in fact tried one of their gin’s, a raspberry gin, and oh my goodness that mixed with soda and raspberries is liquid gold!

So we stopped in to give everything a try, as you do. They do free, yes FREE tastings of every product they sell, so naturally we only tried like 3. Now I will justify that because we tried the raspberry gin straight (I wouldn’t recommend), and then their famous butterscotch and then our normal favourite, a lemoncello. The gin is amazing mixed, but damn we are not that great at drinking spirits. So when we tried the lemoncello, even though it was not as strong as others we were used to, we brought a bottle. You know for those cold nights, and because why not it was delicious! So if you are near Canberra, or are somewhere lost in the wilderness that surrounds it, put ‘Wild Brumby Distillery’ in your GPS and drink everything they have.

After our perfectly reasonable ‘alcohol’ stop we drove directly into the #SnowyMountains. More specifically we headed into the National Park and to the town of Thredbo. When we drove in the town was practically deserted, after all the ski season had just ended the day before. But really with one look at the slopes you could see that no one would have skied on the slopes for a while. The National Park had a number of campsites, which were included in the entry ticket we brought for $16. We ended up stopping in at the second campsite just before Thredbo. It was right on the river bank and was practically empty with just us and two other cars. We picked a spot away from everyone and set up camp. 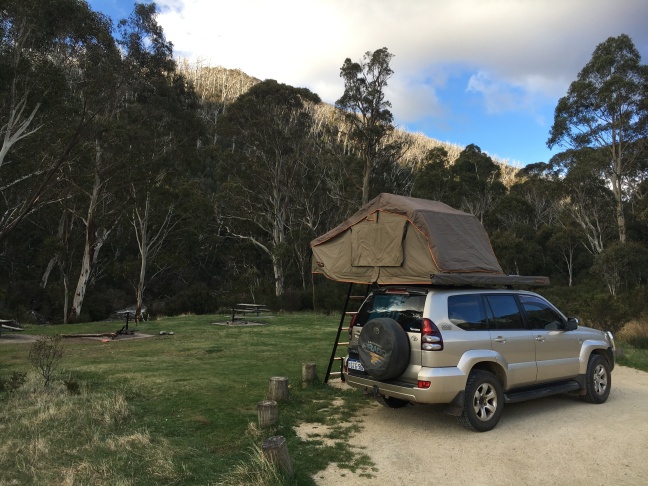 It was only mid afternoon by the temperature was below 10 degrees, I think at about 8 degrees at 4:40pm. For us that was damn freezing! So Alex saw a fire pit and decided to light a fire. There was some wood there already, but when he tried to light it, it mostly smoked, most likely due to the seriously cold temperature and snow they’d have for a whole season… So whilst we attempted a fire, some cute guests also joined us. 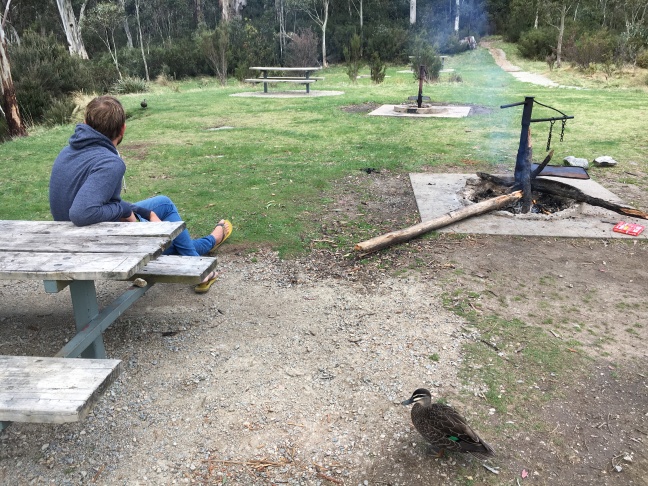 In fact they not only joined us, but followed Alex practically everywhere, even right next to the car. We assumed they were searching for us to give them food, but it was still very cute.

After our semi-failed fire, we decided that it was way too cold to cook dinner outside, so we went straight up into our tent. We ate whatever snacks we had in the car and watched a movie from Netflix. We went to bed a bit hungry and bloody freezing, but we survived the -2 night, waking up the next morning surprisingly well slept.

The weather had warmed up a little so we were able to wear shorts, which we were pretty happy about after the night before.

We decided to go for a small drive through the mountains, just to possibly see Mt Koziosko, since that was our original reason for the mountain visit. We never made it to Mt Koziosko, nor did we actually see it which is quite sad really, but we did see snow!

It may not be skiable snow, but it is snow and it was cold!

After our touristic drove, we headed back towards the town of Jindabyne, had lunch and then continued on our journey south. Our visit into the Snowy Mountains may not have been the usual experience, but we enjoyed freezing our butts off and honestly loved seeing snow, even if it was as hard as the ice you have in your freezer!