Our drive into Canberra began on the coast in the town of Batehaven. We set off early in the morning because we had heard the drive there could take time. It was a semi long drive of about two hours, but it was a really nice drive up through the dividing ranges, which we have passed way to many times, and then down the other side. We passed through a few cute and very old towns, but we didn’t stop as thought lunch in Canberra would be nice. And we arrived around lunch time.

We headed to the suburb of Braddon, which according to my research, was a hub part of the city with lots of restaurants and cafes. In particular they had an open food market with food trucks, similar to Paper Island if you have ever been to Copenhagen, just on a much smaller scale. We got some yummy Vietnamese food there and enjoyed sitting out with all the business people in the sun.

After lunch we drove around the city, which did not take us very long, just seeing the sites. We drove past the old and new Parliament building, drove up to the Telstra Tower and then in fact left the ACT. 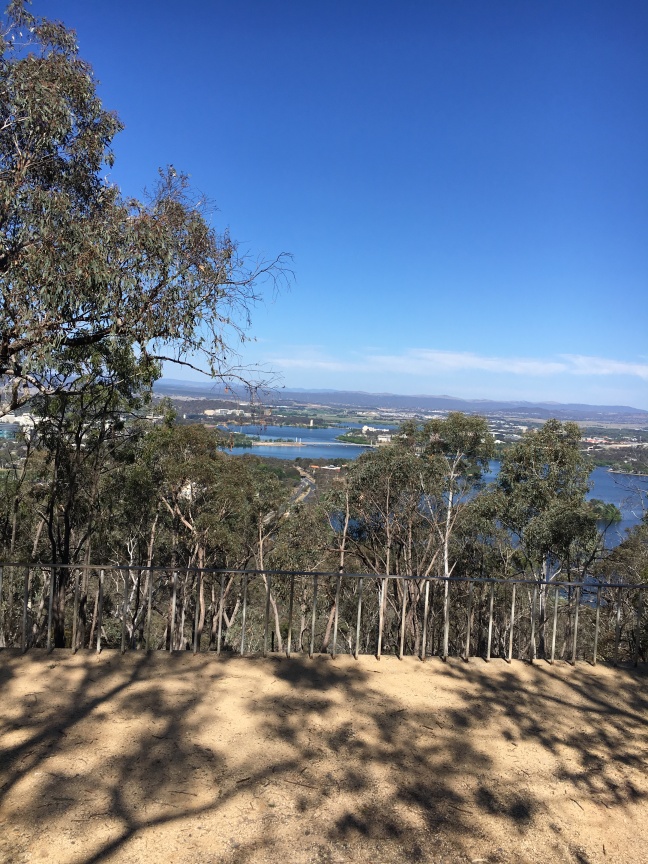 The ACT is really incredibly tiny! And we were not going to be staying in Canberra specifically, no we would be staying just over the border in NSW with a friend of my mums.

So in the afternoon after our city exploration of Canberra, we crossed the border for the 4th or 5th time that day back into NSW. We arrived and we instantly felt at home! My mum’s friend and her husband remind me very much of my parents and we understood why my parents and they were friends.

We spent a lovely few evenings with them, drinking wine and G&T’s, discussing life and learning all about their bees. Yes they have their own bees!

But I am getting ahead of myself. The day after we arrived Alex and I had to take our car into have a particular part fixed of the left side of the car. We had had the part fixed on the right of the car when we were in Cairns, and then this part on the left was fine, but we had driven over 3000km since and so it was bound to happen sooner or later. Anyways Alex had booked the car in and so that morning we drove the car there, only to learn that they had not ordered the part and just wanted to keep the car for a full day inspection, where they would then ask us to come back a week later. It’s safe to say we were not impressed! Alex was wonderful though, he spoke with the staff and they were able to order the part that day and have it ready for our car the next day, meaning we only had to wait a day. So the rest of our day was spent having breakfast at lunch and exploring the city again, mostly in the area of Braddon again. And yes mum we also visited the War Memorial, we enjoyed seeing the history and see here is proof. 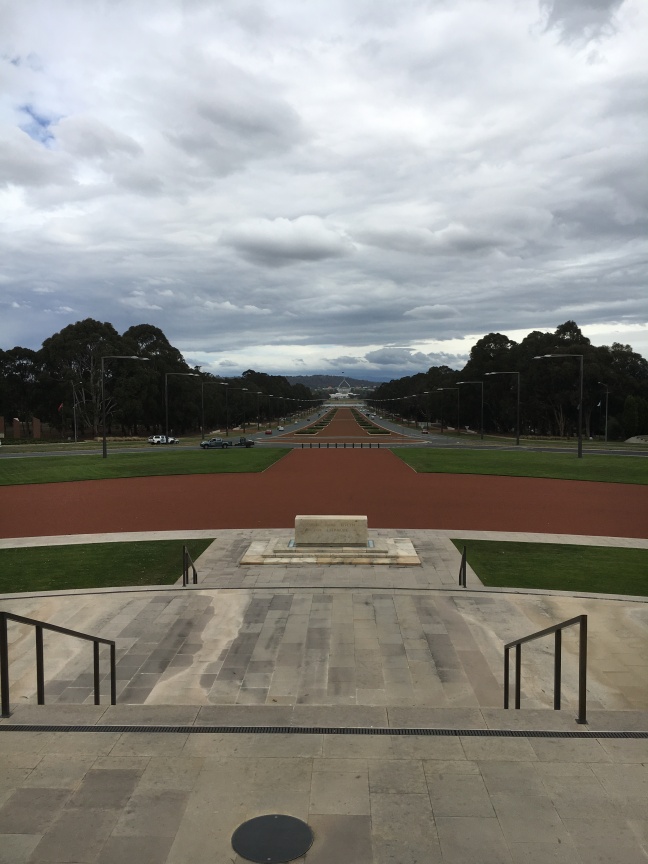 And so we come now to our third day in Canberra. We took the car in and that went smoothly. Except we were now quite a distance away from the city, and without a car or courtesy ride. So what we did was walk. Specifically we walked to the Fyshwick Markets, which is always opened and serves fresh produce and has a few cafes. The walk there was quite a distance and we had skipped on breakfast, so when we got there we went straight to the bakery for a feed.

After that we thought since we had the whole day to keep busy till the car was ready, we would walk into the city. The walk would take us just under 2 hours. It was overcast and our app’s said it would rain. So really it was a great idea right?!

In fact it was such a lovely walk. We went along the city lake and walked next to the water all the way into the center. And it did not rain the entire time we were walking, in fact it only started raining when we got into the center and went to have lunch inside #lucky. 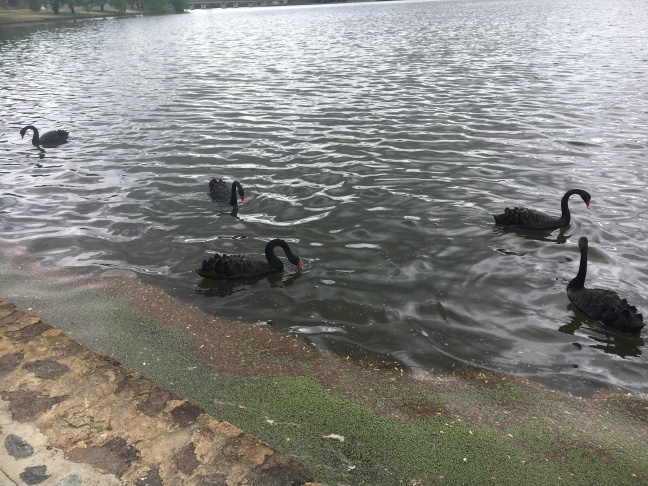 And really the rest of the afternoon went very quickly, after all it took us a long time to walk, which had taken up most of the day. Once our car was ready, they sent a courtesy car to pick us up. After that we went back to the house in NSW and had again another lovely night in.

This takes us to Saturday. We did intend on leaving our host’s house and heading to Mt Koziosko, however when we woke there was a lot of commotion outside.

The bees that they had, had in fact made so much honey that it needed to be harvested that day. And to add to that excitement, they also seemed to have another hive swarming in their garden, which meant that they needed to entice them into a box, where they would then become their second hive of bees.

So instead of departing that day, our day began with Alex helping harvest the honey from the hive. This involved touching and eating a LOT of honey, more specifically just sucking the honey straight from the honeycomb. 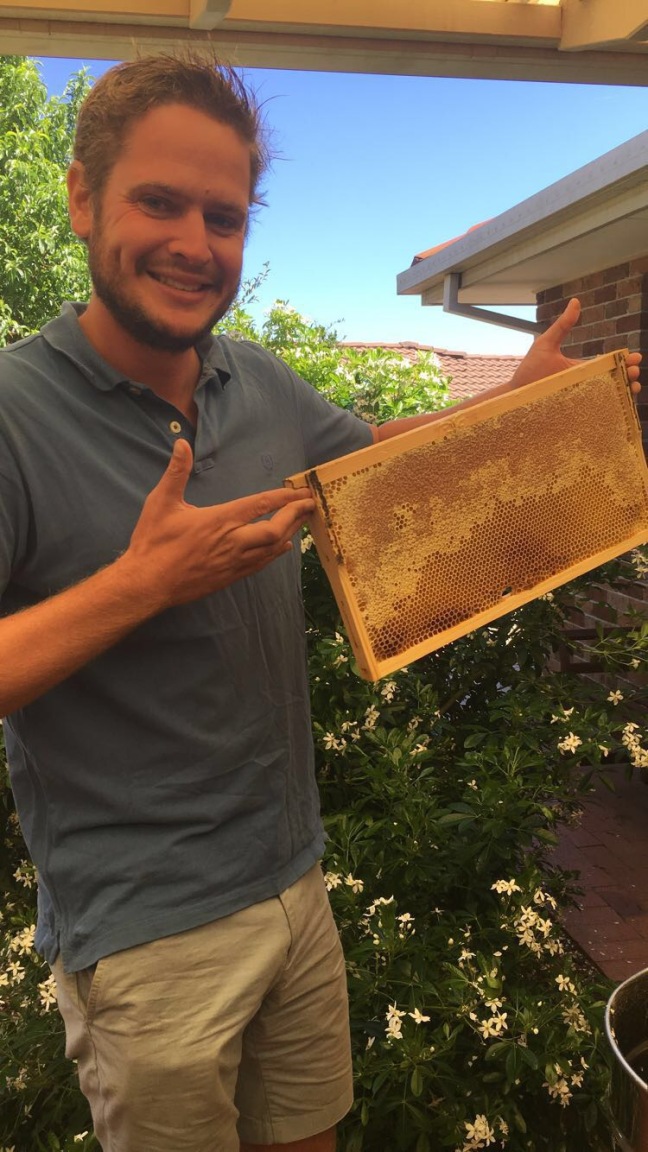 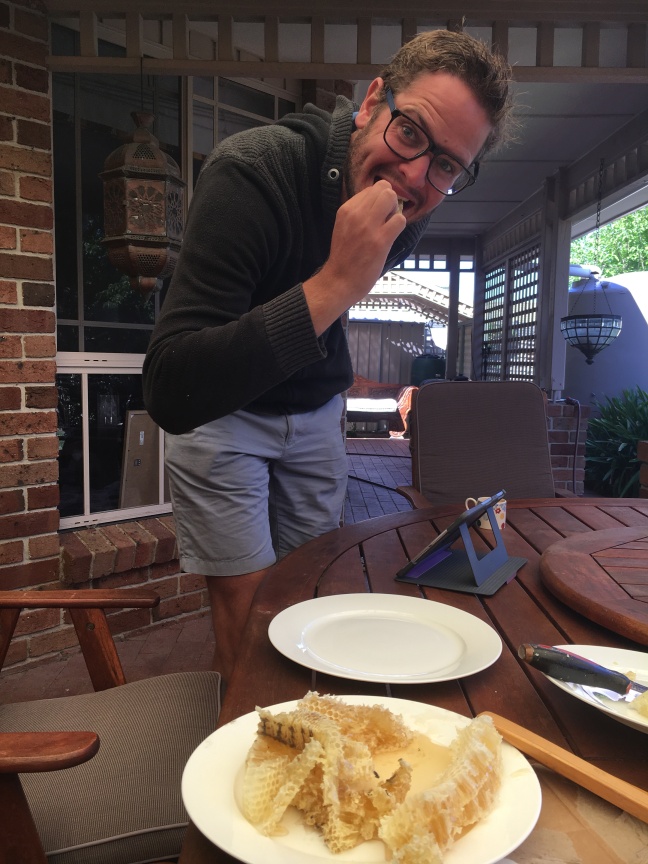 Alex was in heaven. For everyone’s information, Alex is a little obsessed with honey, in fact he will eat a whole jar if you gave him the spoon and said go for it. So when it came to fresh homemade honey straight from the honeycomb, there was some serious excitement. I ate quite a bit too, as did everyone, but I had a bit of a sugar rush reaction. It was some seriously damn delicious honey, but I had to stop when I started shaking haha.

So Alex helped harvest the honey, spinning it out of the combs into a big drum. After that was done, it was time to move the swarming bees on a tree into a box. Alex did not do this part, but helped with the smoker and as bee spotter. I was inside behind the glass door.

Everything was going fine until someone was stung on the chin by a bee. No one ever likes to be stung by a bee, and so we paused work for a while, just to let the bees settle down and continue moving them later.

During this break we decided to go for a walk with our hosts dog Jasper, just to get some groceries as we wanted to cook them dinner. Whilst out walking, just in front of us a lady seemed to have fallen over and she had two little children on bikes with her. Alex rushed over to help her up, as did another lady who had driven by moments earlier. At first we thought maybe she had fallen off her daughters bike or tripped, as her shoes were untied, however it was clear once they tried to help her up they she was very drunk. So when I walked up, I asked if we could walk her and the kid’s home, as we were heading in that direction. The other lady told Alex that was a good idea and to call someone if we could, as I walked away with her leaning on my arm. It was a difficult walk because the kids were telling their mum off, saying they knew she would do this because she always did, and the woman kept saying sorry to me.

In that moment all we wanted to do was get the little family home, after all she had fallen hard on her head and it was cold outside. Once we got to the house, the kids took their mum inside and we said goodbye. From there I called the Police, who then told me to call the Ambulance. I spoke with them for a few minutes and answered all their questions, they then told me someone would be by shortly. Not 10 minutes later the ambulance arrived, and then shortly after that the police got there, and then a second Police car arrived. He lady did not know I had called on her behalf, but when saying goodbye to her I had asked so many times if I could call someone for her, or if there was someone who could look after the kids while she rested, but she did not want that at all.

In the end the Police tested her breath a few times and we think she went with them, but we were told we could leave before then. We were very worried from the moment the lady had fallen, noticing something was wrong and not knowing quite what to do. We realised that calling the authorities on her may not have been nice, but with two little kids, we just hoped we had done the right thing, even if she was just checked for a concussion.

You never know what to do in those moments, but we hope we did the right thing in the end.

After that whirlwind hour, we continued our walk to the shops, all the while Jasper was so wonderful and just chilled by Alex’s side. I am secretly hoping a few days with Jasper has convinced him of getting a dog one day…

We returned back to the house to cook dinner, and then played board games all evening, ending the night with schnapps. We had a really hard time in Canberra….#not.

The next day we woke early and helped with putting the honey collected the day before into jars. 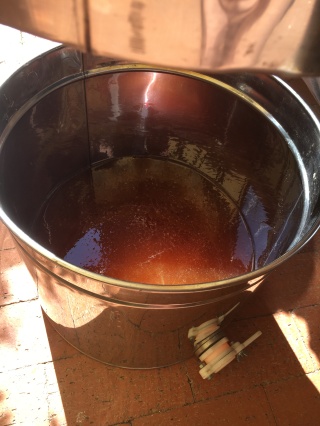 As you can see there was only a small bit of honey harvested….And in the end we learnt that this only happens once or twice a year. We had been so fortunate to have witnessed nature work it’s magic, and we got to take a little jar with us as a thank you for helping. That jar is half empty and that’s not even a week later, we normally don’t have so much left, but Alex is savoring it! Before we left we played an awesome Viking game in the park, with us women very tragically losing, it really was embarrassing! But just ended our amazing trip in such a fun way, we had the best time with my mum’s friend!

Overall we may have not spent all that much time in Canberra, and more time over the border in NSW, but we had an amazing time with our hosts. We loved learning all about bees, having your own hive and harvesting your own honey. It definitely got us excited about one day doing it ourselves.

One thought on “The Nations Capital!”