After an absolutely amazing time on Hamilton Island, out in the Whitsundays and exploring the Great Barrier Reef, we returned to mainland Australia. With the Island still fresh in our minds, we thought we would stay in a resort at our next location, which was to be Halliday Beach.

We arrived late at night, it was a small coastal town that we think survived on retiree’s and holiday makers. However they somehow missed the memo for tourism and signage. We drove around a bit, but eventually we had to call the resort, which had closed by 9pm at night, to ask for directions. Luckily someone answered the phone and she was very helpful as after some directions, a few times repeated, we finally found our cabin.

From the outside it looked like your normal holiday house, however once we entered it was another story. The term resort has definitely been used quite incorrectly in this ‘locations’ regards.

I was the first to enter, and as I crossed the threshold of the door a giant cockroach ran across the floor and then under a cupboard. Cupboards that could have been owned by my great great great grandmother based on the décor. There was not a lot more to do or say now other than hahahahahahahahhahahahhaha.

Now of course the place was just a building with some beds, a kitchen and a bathroom. It was just what we needed, it was just in a little different shape than what we were expecting when picturing a resort.

I am sorry but I prefer sleeping in a tent in the bush. Now that has a lot to do with the bed situation. Chris and Annette took the double bed that you see above, and Alex and I had to figure out how both of us would fit on either the small couch or the bunk bed thing attached to the wall. 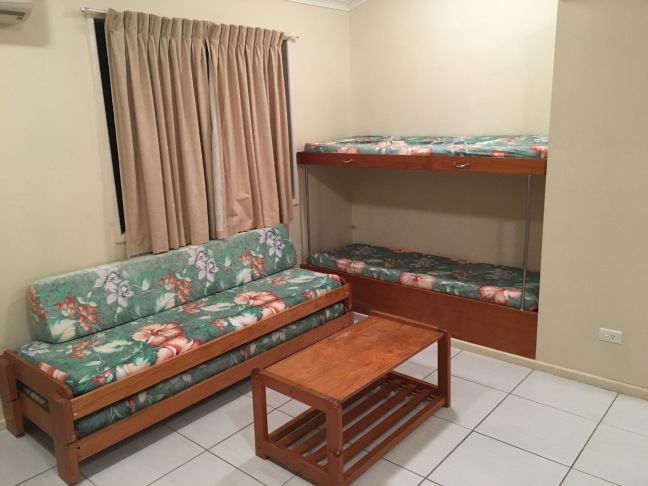 As you can see the bunk bed structure was both not nearly strong enough to hold either of us, nor would it be long enough for either of us!

So we opted for the couch. Luckily it separated into two. So essentially we had the bunk beds but on the floor side by side rather than on top of each other.

I found a stack of sheets in the cupboard and I think used 4 just for the base of the bed. I am a little germ scared at times, except when camping strangly enough.

Anyway, when bedtime came we all got comfortable and both Chris and Alex slept with their feet and half their calfs hanging off the edge of the bed. Funny enough I also had my feet just hanging off the bed, just on top of a wooden bar.

Halliday Beach Resort is definitely an amazing place to stay.

Now the reason we were in fact at Halliday Beach Resort was because it was close to Cape Hillsborough. Cape Hillsborough, which Alex had found out, was famous for having kangaroos on the beach at dawn and dusk.

And so as you can assume we were up very early, in fact our alarm went off before 5am and we got to the beach around 5:30am.

We were not the only ones who had read about the kangaroos on the beach, there were a number of others there already snapping pictures and getting real close to the roos.

We joined the others on the beach and watched the kangaroos and wallabies hop around and even get quite curious.

After a bit of time the owner of the caravan park, that in fact sat right on the beach, came down to the beach. He was carrying a bucket. He walked in a line along the waters edge, placing cones and a little food from the bucket each time. One by one the kangaroos and wallabies followed him and then settled into the food on the sand.

While they ate, the owner discussed his role in looking after the kangaroos, and that many tourists come to see the animals but tended to feed them and get way to close. He explained that when tourists fed them they could and did get sick, especially if they are fed things like timtams…

It was nice to hear how he was volunteering his time to ensure the animals were fed correct food, which in turn ensured the tourism continued. Kudos to him and thanks for keeping the kangaroos and wallabies there for us to enjoy. It was awesome to experience and Annette especially loved it. 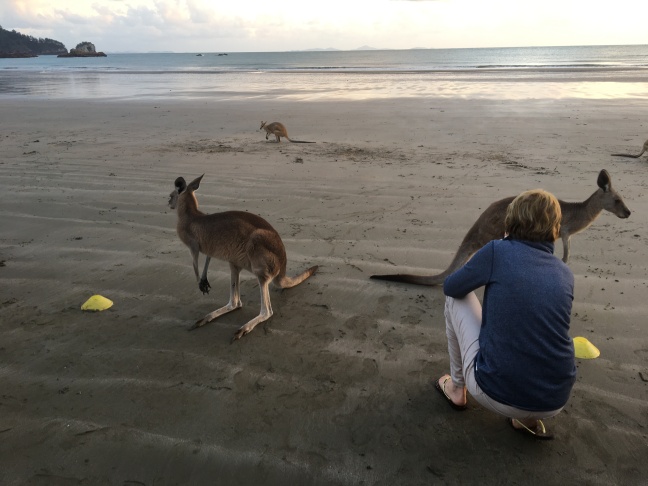 With a good kangaroo fix, and after seeing the sun rise over the beautiful beach, we headed back to our resort to pack up. 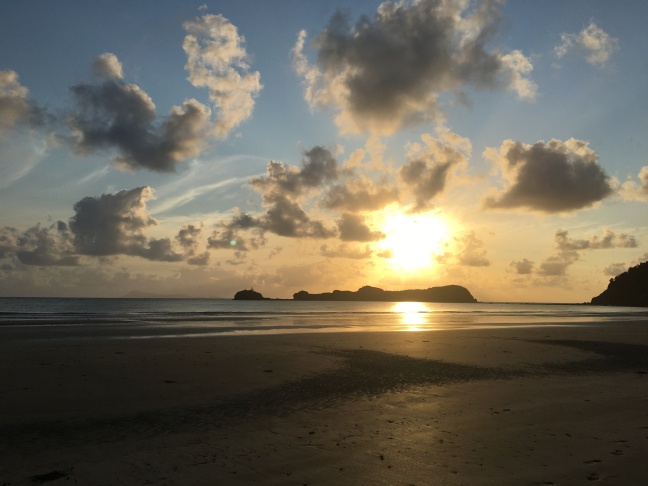 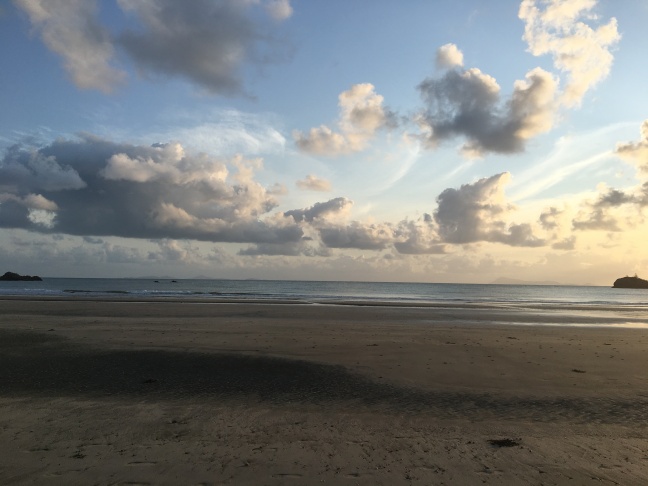 We ended up having a delicious breakfast in Mackay, at a normal breakfast time for some, but on that day for us, slightly delayed. From there we headed inland to Finch Hatton Gorge, a place my cousin had been to when she lived in Mackay and had recommended us to visit.

We did the lovely bush walk through to one of the gorge falls and then it was time to decided; to swim or not to swim?!

I really wanted to jump from the rock that did in fact say ‘no jumping’. My cousin had jumped from it and it had looked amazingly fun.

But first we needed to test the water, Alex, Chris and I went in the freezing water and got acclimatized.

Then Alex and I climbed up the rock and then sat there for a little while.

After some nervous moments, I summoned up enough courage and made the jump. Alex followed and I screamed both times. The video of our jump is on Instagram for anyone who would like to see our bravery and me screaming.

It was amazing! Even more so because of conquering a fear of heights and jumping from large rocks into deep water #livinglife!

5 thoughts on “Resort living and kangaroos on the beach”