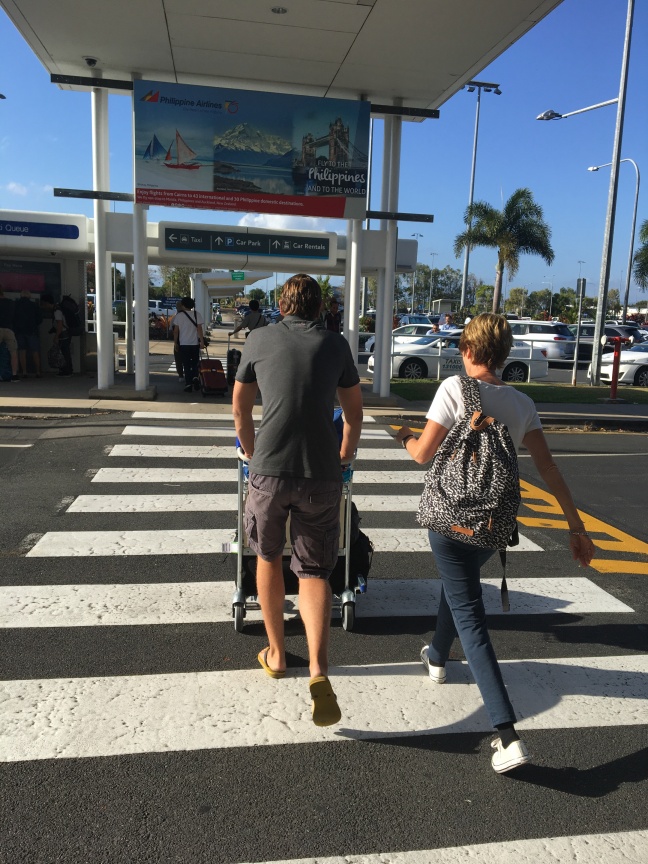 Alex’s parents have arrived! And in good Alyce and Alex style we arrived just in time before they walked out of the gate. For anyone unaware of our track record, we are normally late to the airport, sorry Li, or we are there just in time, 1 minute before a gate closes to be precise.

So in this instance, even though their flight was delayed and then back on track, staying 5 minutes away at a campgrounds did us well.

Our first point of business in welcoming them to Australia and Cairns was to go out for breakfast. We found a cute little café, ordered something delicious and began discussing the weeks to come.

Once we had fed our need for hunger we checked into the Pacific Hotel, where we would stay one night. It was wonderful, Chris and Annette could work of any jetlag and Alex and I could sleep in a normal bed, with a shower and toilet right next to it and a TV with the news and so much excitement! Seriously we were pretty damn excited.

All checked in it was time to go exploring. We did not venture too far as Chris and Annette’s flight did arrive at 6:30am. We found ourselves at the waterfront, where unfortunately you cannot swim in the ocean, but you can swim in the free infinity style pool they have. All equipped with a sand bank on the edge, café and some shady grass areas.

That is where we situated ourselves, and no joke within 2 minutes of placing our towels down and sitting on them Chris had fallen asleep.

Alex and Annette went for a little walk to test the water temperature and get a little light snack for lunch. When they returned we ate the food and then again Chris laid down, as did Annette. As you can see they both needed a little rest after all that flying, it didn’t matter that we were in a park in the middle of the city…

Completely refreshed from their nap, we took Chris and Annette to a bar on the waterfront just a little further around the bay to have a drink. A few drinks down and we notice a TV crew setting up with two women wearing cow girl hats. Turns out they were twins from that show where they send Australians abroad to assess holidays. Anyways it was a whole lot of them sitting there waiting while their poor beers grew warm. Not a show we had watched before but definitely wouldn’t be one now…slightly more on the boring side.

After a refreshing beverage or two we waltzed on back to the hotel where we relaxed a little in luxury. That evening the decision had been made to not travel far for dinner, but to eat in our hotel. The restaurant was Brazilian and so Chris wanted to speak a little Portuguese with the staff.

All in all in was a really lovely evening, but it did not compare in any way to Brazilian BBQ in Brazil itself. Definitely do yourself a favor and try it over there, not in Cairns.

With our belly’s fully of meat and a serious amount of pineapple we ended Chris and Annette’s first day in Cairns and their first day joining us on our big trip around Aus. A great start, eating and sleeping.

2 thoughts on “Welcome Chris and Annette!”