So the car has been fixed and we are off towards the Gibb River Road, YAY! We count this as our official starting point, based on what you would have read in our last post.

Our first nights stop on the Gibb was Windjana Gorge National Park, 21km off the main road. We arrived mid afternoon, found ourselves a spot, threw our tables and chairs down from the roof rack, and then headed straight for Tunnel Creek National Park, which was a further 37km drive. It was a further gorge, which we had heard a lot about and really wanted to see that afternoon rather than the next day. After a small and quickly made wrap for lunch we headed into the gorge. There were a lot of people exiting the gorge, who had been on a tour so once inside we were practically all by ourselves, in the dark, where crocodiles apparently were chilling. 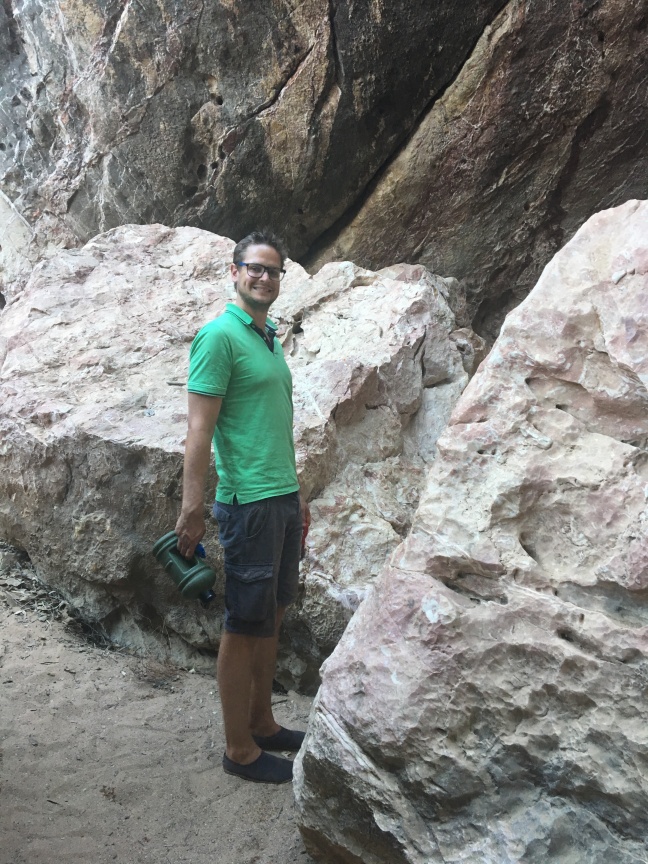 Into the dark we went, we had our head lights, or otherwise know as eikellamp (d*** head lights) by someone else we have encountered on our trip J

The temperature in the gorge, or tunnel creek as its titled, was a lot cooler than outside, a welcome difference for us for at least a few moments. Many of the people leaving the gorge had mentioned they had seen one or two crocodiles in the cave, but not to worry they were just tiny tiny fresh water ones (freshies), so apparently we were fine….

With that reassurance we didn’t think we had much to worry about, and I think I was the only one who was nervous, or encountered a seriously increased heart rate due to too much overthinking. But at a few points within the tunnel we had to wade through knee and even thigh deep water, which for me, with crocodiles swimming around, was scary as f!

But we are fine, nothing crazy happened. We saw them and they then swam to the bottom of the water to hide from us. They may be more afraid of us, but the mere sight of a crocodile is just not natural to us.

Now besides our terrifying experience with the mostly hidden crocodiles, the gorge was absolutely spectacular to walk through, even if most of it was pitch black. A point half way along had collapsed so there was a stunning cascade of light shinning down, giving us a bit of a glimpse back to where we had walked and were walking to. 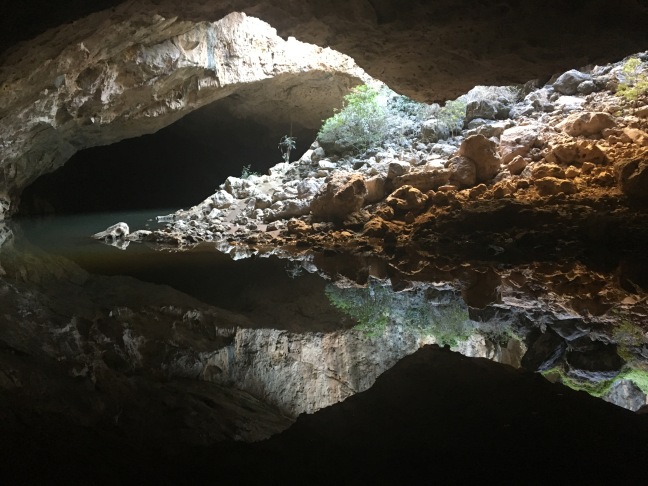 We walked all the way to the end where some Aboriginal drawings could be seen high up on a wall. We then made the journey back, through the dark, wading through the water, again with the crocodiles.

With that moment thankfully diverted, we got back in the car. Driving back the distance to our camp at Windjana Gorge, the sun was slowly setting, casting a beautiful light over the bush and boab tress along the road. Due to the dust caused by our driving there was also a small mist that settled over everything, it was a spectacular sight. We stopped a few times to take some pictures, it does not do it justice but it is still a beautiful sight. 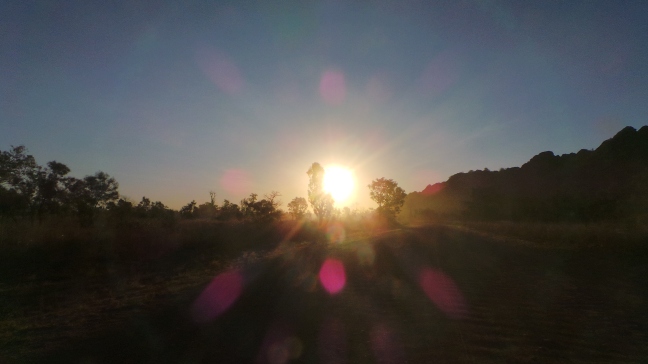 We set up our camp and settled in for a relaxing night, cooking my sister’s famous fish dish. Liz I think we did you proud, made in the bush, thinking of you!

What made our first day on the Gibb even better was the fact that the Windjana campsite had facilities; I’m talking HOT showers and real flushing toilets! Can you imagine our luck, camping isn’t so bad on the Gibb!

2 thoughts on “OK…Now Officially Our Trip on the Gibb River Road Begins!”